Big Mouth: Your Next Quarantine Stress-Reliever

Every day, there seems to be a whole new set of changes. We’re told to Stay Home and Stay Safe. We’re constantly bombarded with scary news that has us all wanting to do whatever we can to make it better. Know that the best thing you can do is to stay home.

But what you do at home is up to you.

Many of us are turning to our beloved Netflix and other streaming services to distract us with delightful stories of poly gay love and tigers and such. What’s that you say? You’ve already watched it all? FEAR NOT : Big Mouth is a lighthearted comedy about puberty and budding sexuality that will keep you laughing as you remember your inner child.

With so many options at your fingertips, why should you choose to watch Big Mouth, you say? Well, let me tell you…

Big Mouth has some Big Names of comedy who are worth checking out in their own right.

The series is the brainchild of Nick Kroll and his childhood friend, Andrew Goldberg. Along with Mark Levin and Jennifer Flackett, these comedians have recreated Nick and Andrew’s youth with a fair few creative liberties! Nick Kroll voices Nick Birch, a character loosely based off himself, who is hurled into the world of puberty.

Just before Big Mouth came out, I was going through a strong John Mulaney phase. He had a couple stand-up comedy specials on Netflix that make me laugh so hard I cry, stop breathing and have to go back to see what I missed while in a comedy-provoked delirium. In Big Mouth, Mulaney voices Andrew Glouberman and it’s too perfect.

The rest of the cast has such big names in comedy as Jason Mantzoukas, Fred Armisen, Jessi Klein, Jenny Slate, Maya Rudolph, Jordan Peele and Richard Kind, among others.

Reliving Childhood from both a Mature and Immature Perspective

Big Mouth is a show about children made for adults.

Though we may be far from puberty, the memory of that time in our lives likely made a deep impact. We remember the feelings, the life-or-death level stakes and the intense embarrassment.

Puberty and our first sexual and romantic encounters leave deep impressions on our psyche. The way this show divides our conscious selves from our hormonal impulses allows us to really relate to that time in our lives. We can identify with the characters and we can also identify with the hormone monsters and the influence they had on us.

This show loves to push the boundaries, and that’s what I love about this show. Entertainment has often been all about shock value, but what is there left to be shocked about? Openly discussing childhood sexuality, that’s what. Honestly, it’s refreshing.

One of the most unique elements to this show in my opinion, is the externalization of internal impulses. There is a Hormone Monster and a Hormone Mistress, who embody the strange rush of hormones known as puberty.

This is Maurice Beverley the Hormone Monster, or Maury. 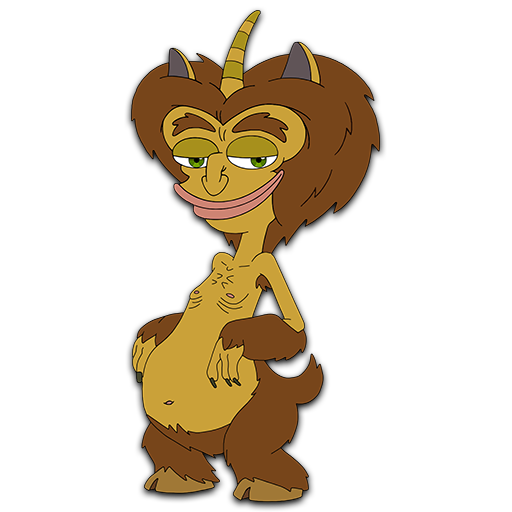 He is exactly what you’d expect from a Hormone Monster. Short attention span, usually focused on sex and depravity, but sometimes deeply moved. He is in touch with his emotions and he feels them intensely. He is often lead astray, but is generally well-meaning and protective of Andrew.

This is Constance Harland the Hormone Monstress, or Connie. 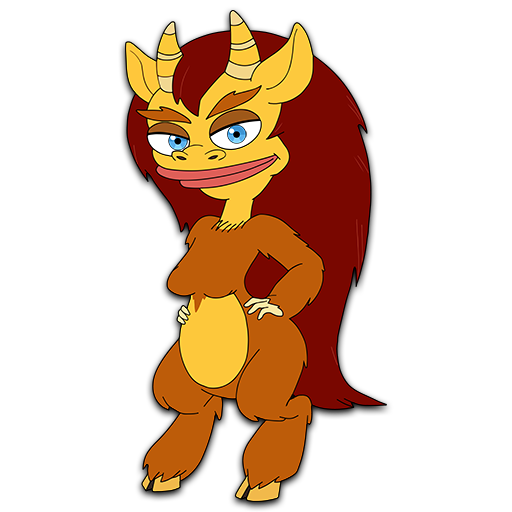 Connie is awesome. Similar to Maury, she is closely connected to her intense emotions and easily distracted. She is very protective of Jessi and she just loves a good bhub-buhl-bay-ath.

They follow their pre-teens around and encourage them to give in to largely insane, yet relatable, impulses. Not only does this open up countless comedic possibilities, but it also demonstrates a very helpful way to look at puberty.

When puberty comes knocking on your door, most of us greet it unprepared. With so much taboo around childhood sexuality, most kids are completely unprepared for the changes they experience. Without any clear source of information, many of us make really damaging conclusions. Often times we believe there is something wrong with us. Hormones surge, we lose control and then we beat ourselves up over it.

Seeing our hormonal urges as separate from ourselves is self-protective. It shows us that our biology is like a relationship that we have to learn to navigate. It gives us the opportunity to be more patient with our impulses.

The hormone monsters aren’t the only internal aspects of ourselves anthropomorphized in the series. I don’t want to spoil it for you by divulging too much, but trust me, it gets better.

Quarantine activity suggestion: Draw or imagine your own hormone monster. If you had a hormone monster, what would they look like? Give them a name. What is your relationship like?

Following in the footsteps of classic comedy series like The Simpsons, Family Guy and American Dad, Big Mouth has its fair share of musical numbers.

Whether they’re singing about how “Everybody Bleeds”, or the broad spectrum of sexuality, these songs never fail to put a smile on your face.

They’re very catchy and before you know it, you’ll catch yourself singing “I was his Monstress!….and he was my whole world….” It’s a spoof of the show’s opening song, which is an incredible song that is a must-listen-to for, well, everybody. “Changes” by Charles Bradley ( Which arguably better than the original ). Look it up. Feel it out.

Quarantine activity suggestion: Write a song about something sexual! You don’t have to be a musician, just think up some lyrics about an element to your sex life and sing it to yourself as a nice little quarantine gift to yourself. You deserve it.

They even have a song about the huge variety of women’s bodies. Saggy boobs, stretch marks and all! You see the main character’s dicks pretty frequently and they even have anthropomorphic genitals sprinkled throughout the series.

Just as Fraggle Rock had Doozers with their own narratives running parallel with the main plot, Big Mouth has a collection of monster dicks. They are often treated like Maury’s children, and perhaps, in a way, they are. He lovingly brings them out from time to time for gags. In fact, I think one of them actually has a ball gag in its mouth at one point.

Their presence is sprinkled in here and there for jokes and they really enrich the show. Honestly, they’re pretty cute.

Quarantine activity suggestion: Make your own collection of penii! Get out your felt scraps or cut up an old faux-fur hat for that monster dick realness. Add whatever accessories, facial hair or clothing you like! 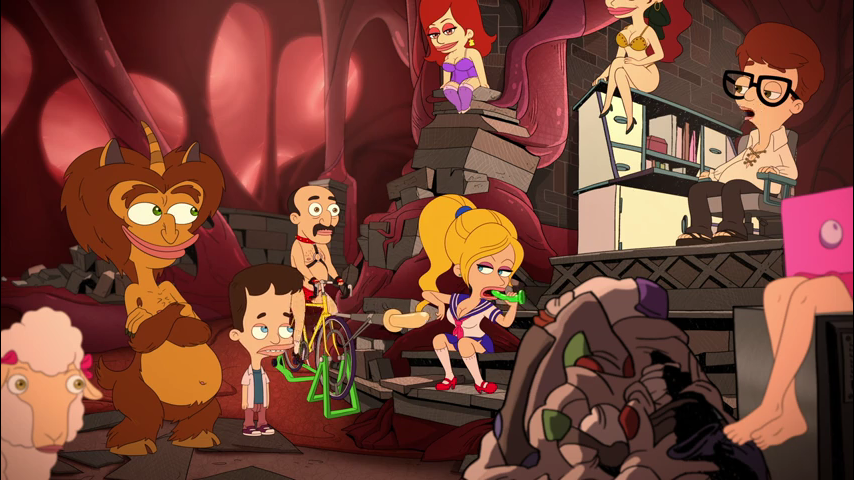 I’d like to believe that we all have a hidden Pornscape within us.

Quarantine activity suggestion: Draw or imagine your very own Pornscape, complete with all your favorite fantasies and maybe a few you’ve yet to indulge. It’s like a vision board but hornier. What does it smell like? What are you wearing? Who else is there? It’s up to you!

In season 1, everyone gets excited about a book where the main character is a hunky man named Gustavo. He is in love with Fatima, but their love is forbidden. He gets turned into a horse and though they continue their relationship, it is never consummated because he’s a horse and that’s a line they dare not cross.

Quarantine activity suggestion: write your own interspecies, polyamorous and/or pansexual fantasy. Bonus points if you can work Nathan Fillion into the narrative.

Big Mouth wouldn’t be Big Mouth without at least mentioning incest. And it does. It has a whole episode about it.

I am definitely glad that it was a cousin that wasn’t integral to the show. It would have been rough to deal with anything within the immediate family. I mean, I have my concerns for Jay and his family, but they don’t deal with it in the story.

Quarantine activity suggestion: practice your social distancing with all your family members — especially the sexy ones.

Well, that’s my take on Big Mouth. It’s really great and I think you’ll love it. There are so many great quotes and jokes that will stick with you and there are already 3 whole seasons out with more on the way. Enjoy those quarantine activities! Let us know how they go! Stay safe, and remember,

“…you never know how many people are inside eatin’ giz”