Imagine you are lying in the grass on a beautiful summer day as the sun warms your body. You can smell the scent of fresh blossoms on the wind as it blows the leaves on the trees. You hear the birds chirping and the ecstasy of this sensual experience moves your body around on the ground, feeling the thousands of blades of grass caressing you and reaching out to penetrate your body.

Are you turned on? You may be ecosexual.

There are so many sexualities out there these days. Homosexual, bisexual, pansexual, heterosexual, sapiosexual, demisexual, digisexual; need I go on? I could. There’s a lot out there. Humans are very sexual and way too cerebral for our own good. More sexualities are daring to shake up the world all the time, but ecosexuality is a little bit different.

As you can see, ecosexuality is a sexual identity, but it is ALSO a radical, grassroots environmental activism movement. It is estimated that there are over 100,000 self-identified ecosexuals across the globe. The label means different things to different people and can range wildly. From enjoying outdoor romantic and sexual encounters to immersing your body in the elements and experiencing full-body orgasms with the earth, nearly everyone could find a definition of ecosexuality that would include them.

How did this start?

Last year, I talked about the radical trend of Boys with Plants, but as with so many things, long before the boys were involved, queer women were already doing it.

Annie Sprinkle and Elizabeth Stephens, two ecosexual artists in love, started the movement in 2004 with the writing of their ecosexual manifesto. 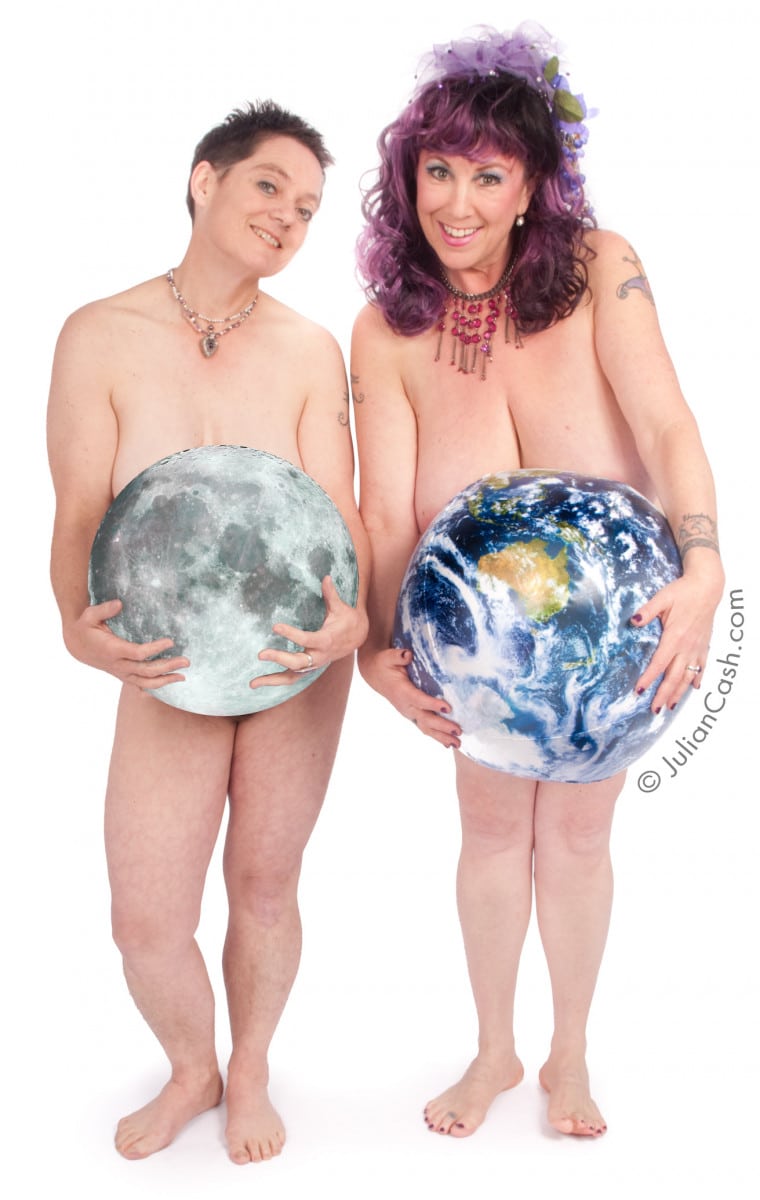 They have since created workshops, performances, symposiums, and even multiple films. Annie has a PhD in Human Sexuality and Beth is an art professor at UC Santa Cruz. They live together in Boulder Creek’s coastal redwood forest and in San Francisco. Together, they have been inspiring people to see the Earth not as a mother, but as a lover.

It is their hope that by nurturing a movement that makes environmental activism fun and sexy, they can infuse joy into activism and relieve some of the weight of an otherwise depressing subject matter.

Married to the Earth

A central focus in the movement has been a series of weddings to natural elements. They have co-created 19 weddings over the course of a decade in 9 different countries. Alongside various performance artists and activists, Annie and Beth traveled the world officiating weddings to the moon, the sun, the sky, the soil, and more.

Attendees of these events would take vows to the elements that they were marrying and consummate the marriages by rubbing these elements against their naked bodies. Honestly, these sound like the best weddings ever. Lots of nudity, over-the-top costumes, and a huge variety of artists that always seemed to incorporate circus and burlesque acts.

Staging these demonstrations as weddings to nature offers a different kind of relationship to our activism. It shifts the paradigm away from extracting and using whatever we want, or alternatively, from an over-blown sense of saviorism to one of mutual caring and love.

Do they actually save the earth?

Perhaps the most damning criticism is that this movement seems very human-centered and devoid of actual environmental impact. Some critics wonder whether these sensational weddings are just self-congratulatory art parties that only serve to make these artists feel good about themselves while making no real difference in the fight to save the earth.

In interviews, Beth and Annie are very vocal about fighting the paradigm that sees the non-human world as separate from ourselves. The messages they are sending out are meant to inspire and infuse environmental activism with joy and sexuality.

Fighting environmental destruction is exhausting work that never seems to end. Too few people are willing to do the hard work, and those who are doing it are burning out. It is essential to add elements to our activism that can replenish our enthusiasm. This is where the ecosexual movement has the greatest impact. They get silly and have fun together with their community. They accept that they aren’t perfect in their activism, but they support each other in continuing to do better.

They ran into trouble. 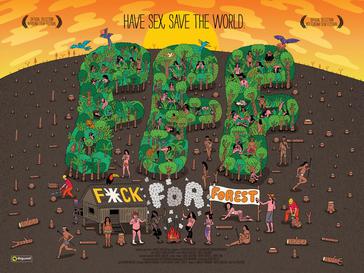 Turns out, despite raising $100,000 in their first year in existence, they had trouble finding an environmental organization that would accept their donation. That’s fine though because it led them to reach out to indigenous groups in Costa Rica to work together to save the Brazilian Amazon Rainforest.

The other trouble they ran into was when they were arrested for having sex in public at a demonstration. Then, they turned up at court wearing children’s clothes, Ellingsen whipped his dick out and then lamented not having sex right there in court. After that, they moved their headquarters to Berlin.

Fuck For Forest has been consistently raising money for rainforests and defending nature since 2004. They’ve supported work in Costa Rica, Brazil, Mexico, and many other countries. They even donated some money earlier this year to Ukraine to help animals who have been impacted by the war.

However, despite their hurdles, they have helped quite a bit in making sure that essential land stays in the hands of people who will nurture it and allow it to remain home and roaming land to plants and animals who rely on it. The refusal of large organizations to accept their funding has led to them working more directly with people who are indigenous to the areas they are helping. If that’s not a case of turning a negative into a positive, I don’t know what is.

Is Anyone Actually Fucking Trees?

I believe so, yes.

There are some who roll around in the soil and rub snow on their clits. Some are out there hugging, licking and fucking trees and a lot of it is performative.

One of the definitions for the term ecosexual is as a new sexual identity, alongside gay, lesbian, queer, intersex, and trans. Some members of the community welcome ecosexuals with open arms as they do with any labels that people create for themselves.

But not everyone is on board with ecosexuals – in fact, I would say very few, apart from those who identify with the label, would accept it as a legitimate identity. Some have suggested that this movement is offensive to people in the LGBTQ+ community because it’s more of an activist movement than a genuine sexuality and including it in the acronym would feel like a mockery of the very real struggles that the rest of the community experiences.

As you will have noticed, however, there is never an E in the acronym and as long as there’s a plus, there’s no real need to add an E. That’s the beauty of the plus! It allows room for anyone on the fringes to identify with whatever label they prefer.

Though this movement was born in 2004, it is continuing on. It seemed to peak in popularity in the mid-2010s and the echoes are still radiating through the world. But should it fade into obscurity, as a strange anecdote from the past?

That is up to you to decide for yourself. Sure, there may be a lot of cringe elements to the movement overall. What movement doesn’t stumble a bit as it finds its groove? But why not take the criticisms and incorporate what we’ve learned in the intervening years into a whole new kind of movement? We can take what we like and move forward as a united front to save the planet.

There are as many ways to contribute to the fight for a sustainable future as there are people with a desire to do better. If we can figure out what we do approve of and want to promote, we can take the movement into our own hands and use it to mobilize real change.

Seeds for the Future

Perhaps the most appealing and realistic way to become more ecosexual is to choose eco-friendly products for getting sexy. Fortunately, I wrote a review of some great eco-friendly sex toys made from plant-based materials. You can also choose toys that will last longer or that are made from less harmful materials like glass or metal.

The simplest way to incorporate ecosexuality more into your life is to just go out there and enjoy nature. Breathe in the wind and lay your body on the trees. Get to know the land around you intimately. Fall in love with it. Take care of the land as you would your lover. Ze’s going through a rough time and needs some support and a whole lot of love.

The startling underlying assumption of the ecosexual movement is that the ‘Earth as Mother’ metaphor is interpreted by many that the earth mother is an extractable resource. An endlessly fruitful entity that can be used up until the using of it kills it. This suggests that our dominating culture still doesn’t recognize the humanity of mothers and the need for community.

The Earth as Mother metaphor is only a problem if you see mothers as undeserving of respect, love, and care. To me, I didn’t see a huge difference between earth as a mother and earth as a lover. Maybe because I’ve loved mothers in many ways and these two identities overlap in my world. If anything, Earth as a lover and not a mother is more restrictive.

Regardless of semantics, I think we can all agree that the Earth needs some love. How you go about loving the Earth is your own business, but it’s clearly important that you do it. If you’d rather not be ecosexual, maybe consider eco-amorous? How about eco-romantic? Or at the very least, eco-friendly, right?