Green Flags: Why Are Plant Lovers so Damn Sexy

I remember checking out the discount calendars after the holidays and finding, I kid you not, a calendar called Boys with Plants. It seemed to be along the lines of a sexy firemen calendar, only it was young, good-looking men surrounded by plants. 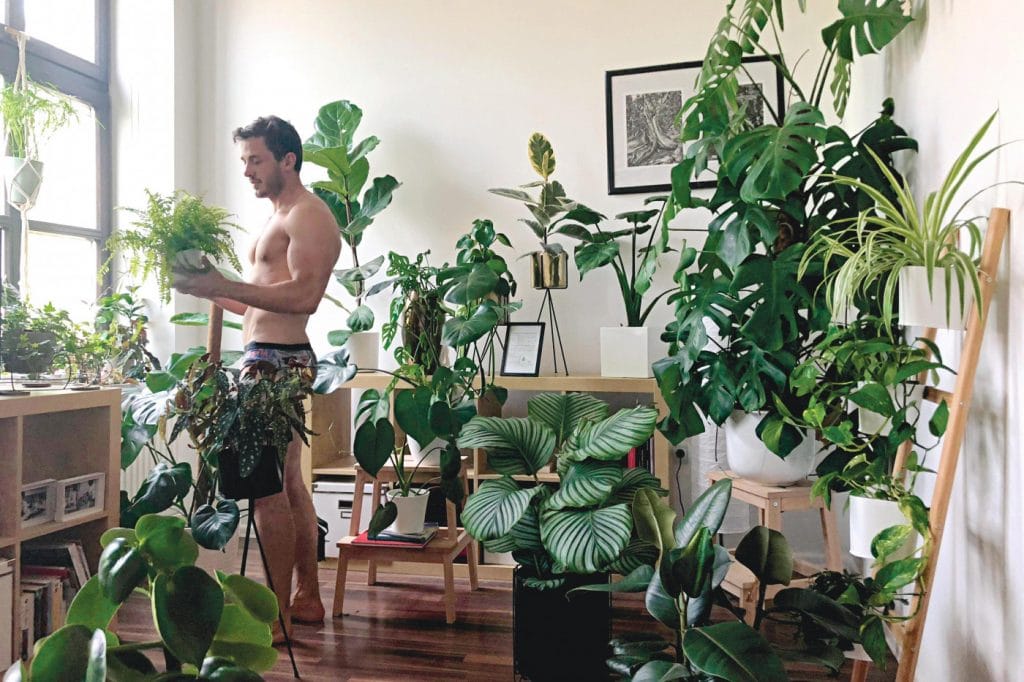 I chuckled to myself, amazed by the mere fact of this calendar’s existence. I thought, “This is the height of current trends, and I’m not mad at it.”

I wondered what perfect storm of influences came to pass to make this a thing. What is it that makes plant parents so sexy? The more I dug into this story, the more subversive this movement seemed to be!

When did plants get so sexy?

I have been an interior design hobbyist since the days of Trading Spaces on TLC, back when it was still The Learning Channel. Since then, I moved on to religiously checking every IKEA catalog and keeping up to date with design blogs like Apartment Therapy.

In the 2010s, white walls and plants became the standard interior design look and it just kept blossoming from there!

A few years ago, all the trends seemed to revolve around pink flamingos and cacti. You could buy just about anything with a cactus on it. Or in the shape of a cactus. Some even went so far as to grow actual, real cacti at home! Hot (or rather, it probably should be because cacti live in the desert).

Then, came the fiddle leaf figs and banana leaf trends, and dammit, somewhere along the line plants became SEXY.

What makes plants parents so sexy?

We’ve all been accumulating a list of red flags, or warning signs when it comes to searching for a partner, but what about green flags? What can we add to the list of positive points in a potential partner?

Plants, Sex, & the Cycle of Life

Plants support life. Plants are life. Connecting with nature fulfills us on a primal, sensual level.

The fragrance of fresh blooms, the feeling of walking barefoot through the grass, and tasting the refreshing juice of ripe fruits remind us of what it means to be alive.

In this era of climate crisis, social isolation, and personal growth, plant parenthood has sprung into popularity. Without other humans sharing our spaces, many of us have found comfort in nature. Whether it be houseplants or outdoor plants, surrounding yourself with living leaves can have huge benefits for your mental health.

Plants help purify your air, which is especially important since we’re spending 80-100% of our time indoors these days. And it turns out that air pollution can be several times higher indoors than outdoors.

Plants also improve your mood, reduce stress and anxiety and boost your self-esteem — all things that can help you out in the boudoir.

Not only do plants create a calming environment that benefits you psychologically and emotionally, but they tell you something about the plant parent as well. Plants require a nurturing caretaker who needs to put in consistent effort and be capable of delicate observation. If someone you’re interested in has a flourishing garden, you can trust that they have the right skills to notice subtle changes and to nurture another living thing.

Houseplants for the Revolution

Personally, I find revolutionaries extremely sexy. Maybe it’s the unbridled passion or the initiative to re-educate themselves. Or perhaps it’s the courage to go against the dominant culture. Likely, it’s the confidence that comes with knowing that you are living a life of purpose and enacting change for the betterment of all. Yeah, probably that.

Many of us live in a colonial, patriarchal, and capitalist world that hurts marginalized people as well as the planet. For centuries, the indigenous peoples across the globe who have traditionally cared for their green parts of the world have been violently murdered, oppressed, and silenced. Many have become overpowered by the giant corporate forces and struggle to support the Earth’s healing.

Caring for the natural world has become a radical act.

When I see a young hottie tending to their garden, or speaking softly to their plant babies, or making nutritious meals with the vegetables they’ve cultivated, I get weak in the knees. That hot queer babe with the garlic scape tattoo? They’re doing the work of changing the world and restoring balance in the quiet ways that they can. And peaceful revolution is sexy AF.

The Boys with Plants calendar ( like literal boys with plants ) is a total thirst trap, absolutely, and it is doing it in a subversive way.

The patriarchal standards that seem to rule the world discourage boys and men from being sensitive and nurturing. These traits are “supposed” to be reserved for women. We tell little boys that “boys don’t cry” and then make fun of the few men who manage to retain that proximity to their emotions.

Often times when movements try to offer a traditionally feminine thing to men, they do so by rebranding it as MASCULINE. This tendency often takes the beauty and artistry out of the thing and pushes it into the realm of toxic masculinity, wiped clean of its similarities to whatever it was when it was dominated by women.

Boys with Plants retain that sensitivity without questioning their boyhood. They show pictures of joyful boys surrounded by the physical manifestations of the love they have to give to the world. The love that they have used to sustain life. Every photo gives you all those good vibes that plants give us, which is just what we need at a time when men are waking up to their privilege and trying to reshape their collective identity in a way that benefits the rest of the world rather than oppressing it

Scott Cain is a freelance graphic designer from Perth, Australia who has a lot of gorgeous and HUGE plants. He and his friend, James, have been sharing pictures of their amazing plants on Instagram for years.

They started sharing pictures of hot guys with their plants and got so much joy from that exchange that they decided to start sharing them on a dedicated Instagram account called Boys with Plant.

After a while, they compiled so many amazing photos that they created a successful coffee table book, and then ultimately the calendar that I happened to come across. They’ve even come out with a quarterly magazine that launched in May 2020 at the beginning of the pandemic. 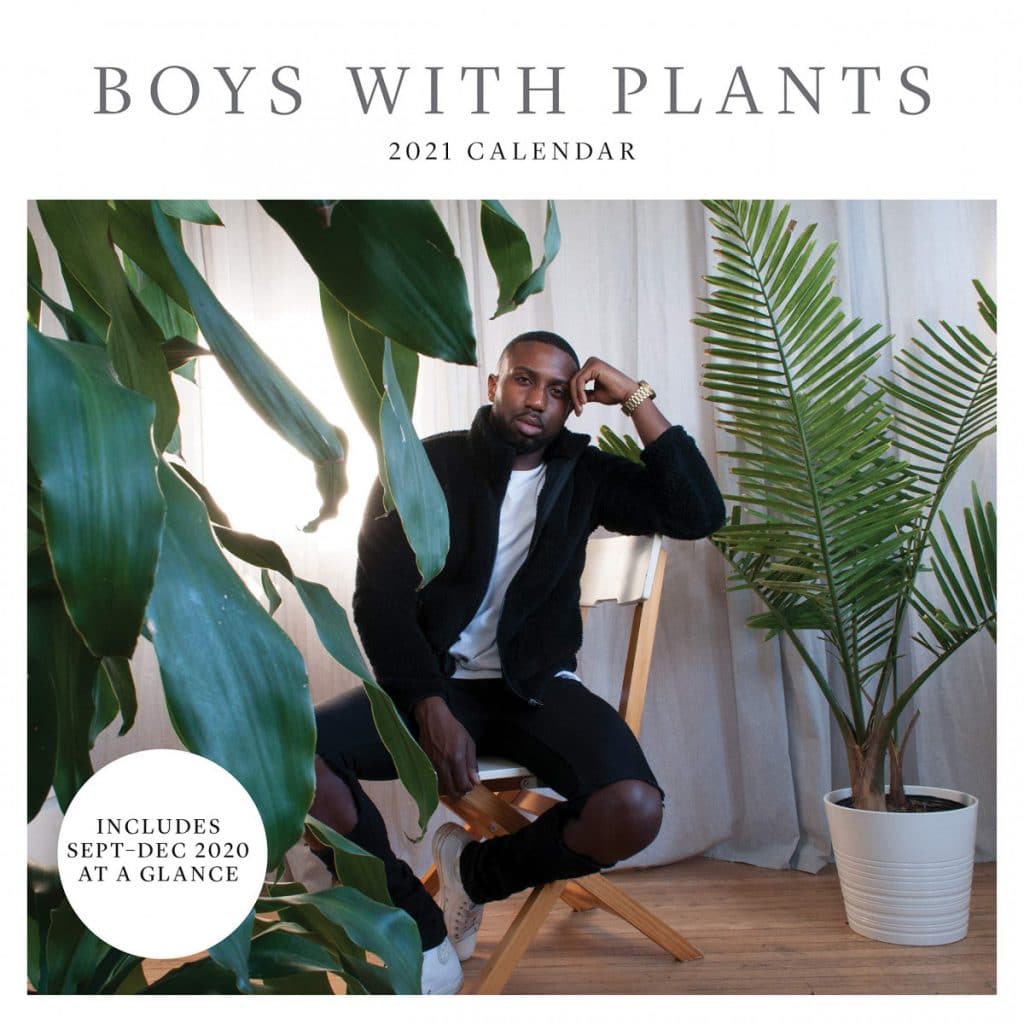 But that’s not the only place you can find Boys with Plants. They’ve been featured in Vogue, Buzzfeed, and more. Scott Cain has even been featured on, get this, the Plant Daddy Podcast, a gay plant-enthusiast podcast.

Is this a gay thing?

But Boys with Plants isn’t exclusively gay, just as leather fetishes aren’t solely for gay men. The term ‘boy’ is actually very open-ended and Scott Cain has been vocal about wanting more diversity of boys featured on the account. He’s interested in featuring trans boys, big boys, old boys, and boys who may not always identify as boys, so long as they’re identifying as a boy in some way at the point at which the photo was taken.

Yes, plants seem to be especially popular in the queer community, but they’re also just generally popular. Caring for another living thing can bring so much joy into your life, and there are so many types of plants to suit your lifestyle and needs.

What about people who aren’t boys?

Sexy plant parents exist in all forms and though Boys with Plants have made a big splash lately, Hello Plant Lady also exists. It seems less sexually charged than Boys with Plants, but there are still plenty of very hot plant ladies involved!

I tried to find a non-binary or non-gendered account along a similar theme and though a few seem to be starting, nothing really exists on the same scale or in the same style as Boys with Plants. Though, just because it’s not a thing yet doesn’t mean it won’t become a thing. There are a lot of different kinds of people who care for plants and lots of different kinds of sexy.

Hop on the trend and snap some pictures of your sexy self with your plants!

If you’re a boy or a lady, tag these accounts but make sure the star of the picture is the plant. Boys with Plants require at least 50% plant in their photos and I think that’s a good rule of (green) thumb!