GLOW is one of an increasing number of shows, though still not enough, that feature main
characters that aren’t all just white, cis, able-bodied, hetero dudes. The majority of the
characters are women, many of whom are people of color and they have goals beyond
romance. Yes, this is basic stuff that shouldn’t be news-worthy, but it is. It absolutely is. Let me
share with you why the show, and especially Season 3, is radical as fuck and should be
watched and supported.

After I graduated from university, I was fortunate enough to meet and make friends with the local radical feminists. The stereotype of discovering feminism during post-secondary school didn’t apply too much to me. I was very aware of angsty women in music and considered myself a feminist, but I still had so much to learn. My psychology courses didn’t help like a course in
Women’s Studies would have, so I was grateful to have come across friendly folks who had
taken those courses. One of the first things they taught me was the Bechdel-Wallace test.

The Bechdel-Wallace test is a measure of women’s representation in fiction. In order to pass
the test, there must be two women characters who talk to one another about something other
than a man. Bonus points if they have names! My first reaction was “That’s such a low bar!
What work of fiction would even fail this test?”. Then, the wheels started turning and I began to
realize that startlingly few books, movies, and tv shows met the criteria. About half meet this
criteria. Half. Digest that for a second.

This is just the baseline, though, and GLOW has so much more going for it than
the bare minimum.

There was no depth to her character, though they seemed to try to build it into her backstory, and she committed plenty of sex-work faux pas. The result was that she gave off the vibe of a scared little girl with a shrill voice trying to be commanding without having any understanding of what that means.

GLOW, however, chose to create a character that threw those stereotypical, and largely untrue,
expectations in our faces. Their sex worker is a man and he is very professional. He initiates a
discussion of terms in a discrete but direct way doesn’t appear to have any sort of vices that
sex work is supporting and manages to have a very healthy client-worker relationship with one
of the women of wrestling.

Contrary to most fictional portrayals of sex workers, his role in and of itself isn’t controversial, though it does play a part in dramatic plot twists. His identity as a worker that provides illegal services puts him in a vulnerable position and that power dynamic is explored a bit in Season 3 and done so in a very real-life way.

To remind those of us who forgot or were not there: the first same-sex kiss on TV happened in
1991 and people were still upset about it a decade later when two men kissed on Will & Grace.
Society’s acceptance of the LGBTQ2SIA+ community has been slow-moving and I applaud
GLOW for including characters in that community and portraying them in realistic and
believable ways.

Arthie and Yolanda have been stealing hearts since last season and this season shows them
tackling the hard truths of living a same-sex life. 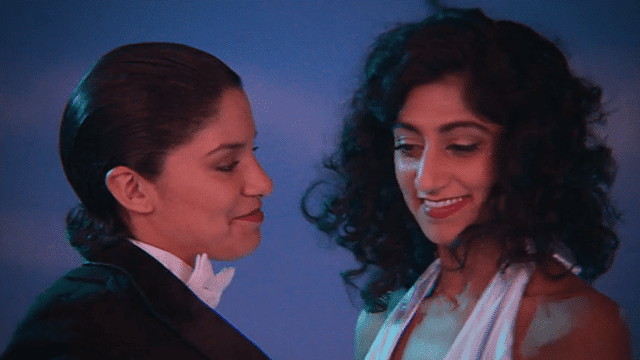 Yolanda, who has been out much longer than Arthie, picks up on subtle indicators that not all the wrestlers are down with the gays and offers the very sobering advice, “when people show you who they are, you have to pay attention”.
Until this season, Arthie’s exploration of her sexuality has been very innocent and naive. Rather
than portray their relationship with rose-colored glasses, GLOW has dug a little deeper to
peek into the reality of being gay in the 80s.

This season also sees Bash exploring his sexuality beyond what we saw last season and with a
much more aware and fearful place of understanding. We’ve come a long way since the 80s in
some ways and yet these fears persist and are grounded in reality. To this day, I know people
who have been fired, shamed, disowned or in some way very punished for their sexuality. I
applaud GLOW for being able to show the good parts as well as the bad parts without adding
to the stigma.

Group sex was always a taboo subject when I was growing up. It definitely was not a thing that
“normal” people did. Threesomes were something really cool guys did with sluts. Group sex is
rarely portrayed in programming and when it is, it is typically comedic or over-the-top featuring
two women and a man. When there actually are MMF threesomes on screen, there is rarely any
interaction between the men. All of that is changing.

Often times when people talk about diversity, they just group everyone who isn’t a 30-year-old
straight white man into one group and kind of pretend like there’s the “normal” group and the
“diverse” group. Identity is a lot more complex than that. GLOW is able to show how these
different identities interact with personalities and other identities. Tex, for example, is
surprisingly supportive of the AIDS support fundraiser for such a conservative, a traditional man yet his attitude towards women remains problematic.

The characters are all fairly different from each other, with different world views and
experiences that have interesting conflicts and harmonies. Much of this is brought to light
when they decide to switch roles for a show, suddenly shining a light on how much worse their
caricature-roles play when done by people with different identities. This was a clever way for
the show to touch on the ever-controversial topic of who gets to say what based on their
identities. 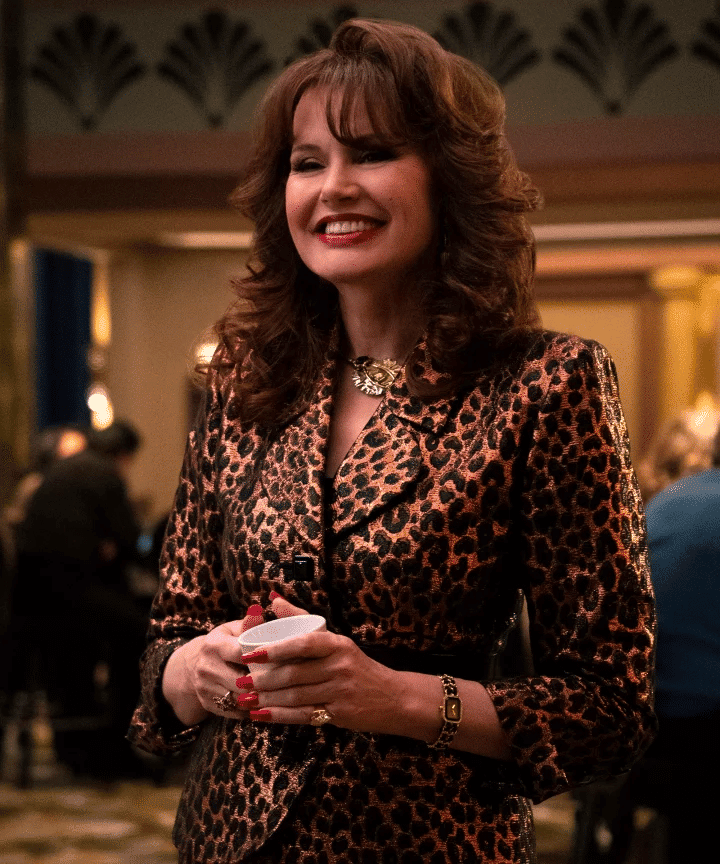 Let’s be honest, Geena Davis was an entire generation’s crush. I have yet to meet a person who
grew up in the 90s who isn’t into her. She always had a cute sweetness to her, yet was clearly
strong and powerful. Geena Davis plays a Las Vegas Director at a large casino, so there are
plenty of power blazers with some statuesque shoulder pads! As always, she oozes charm. Her presence on the show challenges the societal expectations of older women. She is powerful. She is sexy. She is magnetic. She is recently divorced (irl)! GEENA! TAKE ME NOW!

Not only is her character a powerful, intelligent, independent woman, she also was a showgirl
at the beginning of her career and even puts on the glamorously revealing costume and takes
to the stage! Miles of naked Geena Davis skin! Geena Davis’ 63-year-old boobs are incredible
and I’m still having sex dreams about it!

RuPaul’s Drag Race has hugely popularized drag over the last decade and we are seeing more
and more drag queens everywhere! This season of GLOW introduces Bobby Barnes, a Vegas
drag queen who impersonates Barbara Streisand, Liza Minelli, and Carol Channing. He and
Sheila form a close bond and support each other through some tough moments. Bobby is able
to see Sheila in a way that no one else does and he gives her the strength and support to
finally rid herself of her elaborate look that has been her armor for so long so that she can be
comfortable as herself.

The refreshing part of Bobby’s portrayal in GLOW is that he’s not just a caricature. Drag tends
to be over the top and cartoonish during performances and on-screen representations tend to
lean into that and remain purely comedic. Bobby Barnes is a complex character with some
heavy doses of tragedy and realism not often seen.

Sam’s daughter, Justine, has grown a lot throughout the series and this season brings her back
to seek Sam’s approval after finishing her first screenplay. All of her admiration for her dad
brought her up with a keen interest in movies and writing which has paid off! Her work is impressive and reveals that she is a talented young writer. It’s touching to watch Sam struggle
to make up for lost time and be the father he wishes he could have been for her. At the same
time, Justine is struggling for Sam’s approval and succeeds both in gaining his approval and in
closing a film deal with her script. She is given a huge amount of control at a very young age
and grows into that position.

Women in creative fields are rarely given the respect and power they deserve, especially so
when they are also young. Representation matters. Seeing a young woman succeed, even in a
fictional format, is empowering to young, ambitious women. Younger generations need to be
heard and that will only happen if they believe they will be taken seriously and valued. Hell
yeah, Netflix! Show us more young voices being heard and respected!

Season 3 of GLOW does not disappoint and if you haven’t been watching, ADD IT TO YOUR
LIST! Three seasons deep, it remains a show that pushes boundaries and tells stories so rarely
told. The 80s was an interesting time. It was flashy and exciting and fun in so many ways! It
was also deeply oppressive in at least as many ways as it was liberating. Rather than choosing
to mirror the media of the time, simplifying or downright ignoring the problematic aspects and
creating fantastical images of upper-middle-class whiteness, the creators of GLOW chose to
tell these stories within the culture that had many prejudices and show the challenges that
came with the times.

You will laugh, you will cry, and you will see every character’s flaws and virtues depicted with
complexity. The outfits are incredible, the music is to die for and the stories will stay with you
long after you’ve binged it all. So, tease up that hair and throw on some glitter — it’s time to
GLOW.