Christmas time brings many gifts, including some silver screen hotties to warm up your long johns!

Deck the halls with babes of Christmas, falalalalahhhh lalah lah lah! I’ve compiled a list of my top Christmas movie characters I would bang.

Perhaps you, too, might enjoy fantasizing about these frosty treats!

12. The Grinch played by Jim Carrey 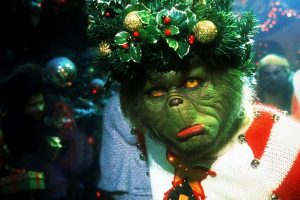 Ok, now, hear me out. This was certainly not my top pick, either. And I’m not proud of what makes him sexy, but I do have a lot of love and sentimental attachment to Jim Carrey having grown up during his Liar Liar and The Mask days. And don’t you dare forget about The Truman Show and Eternal Sunshine of the Spotless Mind.

The Grinch turns you on in the way you wish it wouldn’t. He could be a Sub or a Dom, but either way, you’d be walking the consent line. There would be a lot of shame involved. Might make each other cry. Safe-word-mandatory play.

If nothing else, the Grinch’s heart grew 2 sizes in one day, so you know he has the capacity for growth, which is sexy as hell.

Besides, who doesn’t like body parts that grow several times their original size!

11. Clarice in Rudolph The Red-Nosed Reindeer, voiced by Janis Orenstein 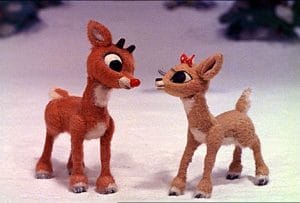 The holidays just aren’t complete without watching those scary claymation movies from the 60s that grace our TVs year after year. Unfortunately, most of those characters are so problematic that I had a hard time picking a babe from them. But then I remembered Clarice.

Clarice is the only deer that doesn’t think of Rudolph’s nose as a problem right from the start. She’s gutsy and confident, telling Rudolph she thinks he’s cute. She’s not afraid of non-conformity and she even has a lovely singing voice. Plus, those eyelashes!

I wouldn’t mind that doe licking my tinsel if you know what I mean. 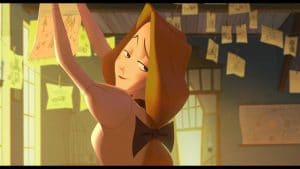 Ever watch Parks & Rec and wish that Anne was just a bit more of a baddie? Well, in Klaus, Rashida Jones delivers that badass side. Alva is a jaded school teacher turned fish monger in a sad little remote village where no one sends their kids to school. Her entire reason for being there doesn’t matter to anyone and she’s been stranded for years, but with the power of inspiration, her passion for teaching is reignited.

There’s nothing sexier than a disillusioned optimist who eventually gets her spark back. She can be heartless and cold. She’ll gut a fish right in front of you without flinching. Hot. And then turn around and exist in a wholesome and hopeful space, bringing joy to children. Swoon.

The movie ships her with the annoying postman who has almost no redeemable qualities. I would really like her to pair up with Klaus, though. He’s a big, intimidating softy, and they’re similar in a nicely harmonious way. Plus, I bet their sex life would be way more fulfilling! 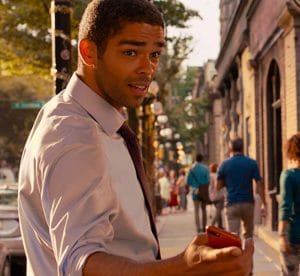 I have to say, I really loved watching Noelle. I didn’t expect to like it, but with all the feminist messages, it was hard not to like. I only rolled my eyes a few times, mostly at the ridiculously obvious Apple product placement.

Jake is a private investigator that Noelle hires to help her find her brother. He’s a newly single dad trying his best for his son. It’s heartwarming to see, and we don’t mind looking! He’s sweet and not creepy. They also don’t ‘get together in the end’ because that’s not what Noelle is all about. And that would be weird. The whole movie takes place over the course of a couple days. That’s not enough time to fall in love and I’m glad the writers didn’t force that on the plot.

Jake is young, smart, and caring. He wears casual business attire and doesn’t have any problematic moments. Plus, his kid is really cute. He even helps her bust out of the mental hospital. What a babe! Who doesn’t like a good dad?

8. Prince in The Nutcracker Prince, voiced by Kiefer Sutherland 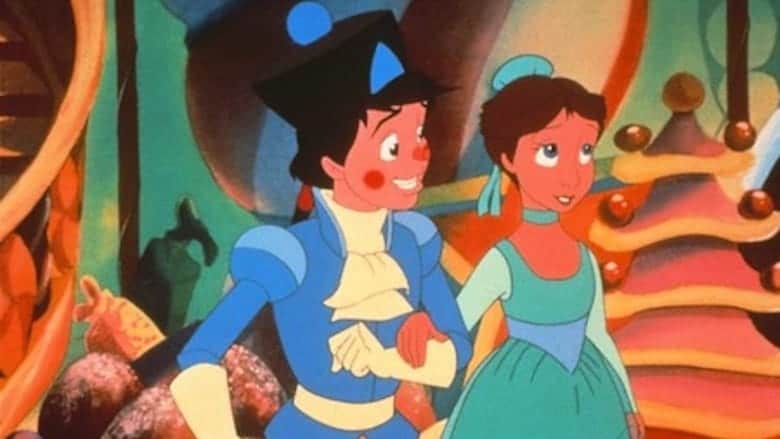 Released in 1990, The Nutcracker Prince became a classic Christmas movie in my household. A 24 year old Kiefer Sutherland voiced the endearingly awkward prince who falls in love with Clara in the land of the dolls. Their one-night romance is emotional and innocent.

He’s a quiet gentleman who rises to the challenges set before him. Even his weird wooden facial features don’t detract from his attractiveness. I certainly wouldn’t mind him cracking some nuts with me.

7. Graham in The Holiday, played by Jude Law 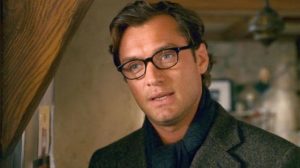 This movie was made for thirsty young adults. It’s got Kate Winslet, Cameron Diaz, Jack Black, and Jude Law. Stiff competition, but Jude Law won this one.

Again, he’s a great dad, and seeing him with his kids is so very heartwarming. To up the ante, it’s not that he and his wife broke up. There were no unaddressed problems, no fatal flaws…except the truly fatal one — she died. Graham is a widower and a devilishly handsome gentleman.

Hard to compete with that. 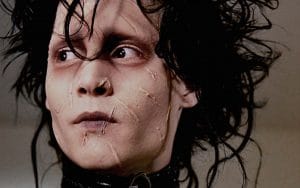 For all the goth/witchy/emo folks out there, Edward Scissorhands has long carried the holiday flame. Head-to-toe leather? Check. Aloof and difficult to read? Check. Better person than most deep down? Check.

Young Johnny Dep was such a dish! It’s really too bad he fell for a popular cheerleader. I mean, I LOVE 90s Winona Ryder, and yes, she is also super hot in this movie, but her character ends up losing her points on this one for me. Her movie mom though…. 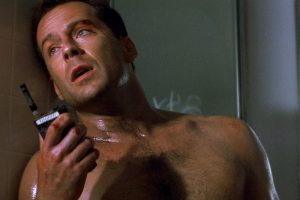 I have to admit something: before this week, I had never watched Die Hard. Scandalous, I know, but there was so much enthusiasm from MEN about it, that I instinctively resisted. However, as it turns out, it’s a FUCKING good movie!

I also really resisted naming Bruce Willis’s character as the hottie in this movie because by the time I was forming my core memories of Bruce Willis, he was giving off dad vibes and I hadn’t really seen him as a hot guy. I saw him as a guy that reminded me of my dad, and, ew. BUT seeing him at my current age, while he was also this same age really shifted things for me. I get it now. Bruce Willis can get.

I can even overlook him being a cop because this movie is that good. They actually tackle toxic masculinity by having a scene where two men express love for one another in a genuine, honest way without being weird about it! I will say though that my kinkier side totally wants to have some switch play with Alan Rickman’s character, Hans Gruber. 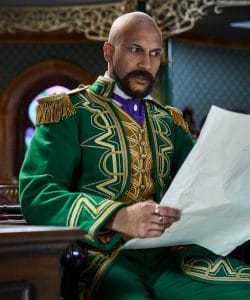 Jingle Jangle is a classic Christmas movie with all the magic and whimsy you could ask for —without any white nonsense. But among all the characters in the movie, I think Gustafson probably knows some kinky shit and I am so eager to find out!

He’s got all the sex appeal of the villain, but also manages to show a vulnerable side that just tugs at your heartstrings. He’s a flashy showman who has gotten used to being larger than life, so if bravado turns you on, Gustafson’s your man.

If nothing else gets you, you can’t tell me you don’t want to jump his bones after hearing his Magic Man G song. That man can SING! 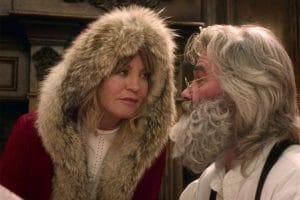 At first I thought that Kurt Russell was the thirst trap of this movie, and that’s not wrong, but all of his hot Santa ruggedness was forgotten the second Mrs Claus turned around.

She shows up in knee-high leather boots and a chic fur-trimmed coat with the hood up. She comments on Santa’s eventful night and he downplays the whole thing. But then she leans in close and says, “Well Nick, were you just a little bit naughty last night?” And then you know; they fuck.

It’s so good to see an older couple who have had a long life together and are still in love on screen. Not only are they still in love, but they’re HOT. Like, get-me-in-on-that-threesome-action level hot. 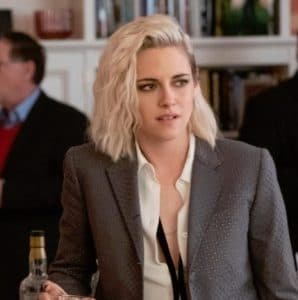 Ok so this isn’t the best Christmas movie, and there’s a lot of cringe moments with the rich, white family, but Kristen Stewart is such a good gay thirst trap in it. Plus, Dan Levy gets plenty of screen time. Aubrey Plaza even makes an appearance. *fanning myself*

If you’re trying to decide which queer Christmas movie to see, skip RIGHT OVER Single All The Way (it is seriously AWFUL) and watch Happiest Season instead. Not only does it have a happy ending, but John (played by Dan Levy) makes a really touching speech about coming out that will leave you in tears.

Abby visits her girlfriend’s family for the holidays and discovers that their relationship has been kept a secret this whole time. Then she gets roped into putting up with the charade! This movie is a total sad gay Christmas movie about people who need to be better. And poor Abby is just trying to deal with it all and we all just want to comfort her and be her rebound.

1. Dudley in The Preacher’s Wife, played by Denzel Washington 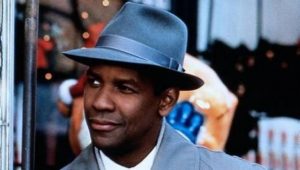 As a hopeless romantic who grew up in the 90s, Denzel Washington has always had my heart. Which is why I was so happy to watch The Preacher’s Wife this year. Not only is he drop-dead gorgeous, but he is playing the role of a literal ANGEL. And he does it very well.

This movie is full of babes. The preacher’s wife is played by none other than Whitney Houston, and she sings in the movie. She sings “what love sounds like”, and Dudley the angel sees her with pure love in his eyes. If you want that big love feeling with a heavy dose of purity, The Preacher’s Wife is a must-see. You’ll be in swoon heaven in no time!

Who are your top picks for characters that give you a little extra dose of holiday cheer?