Most modern societies have lawful restrictions against consanguineous acts and marriages. However, despite most people cringing and shuddering at the very thought of having sexual relations with an immediate family member, the appeal of incest isn’t quite as uncommon as one might think.

Incest in the media

Coincidentally, the topic of incest has recently been explored more and more in popular culture. One interpretation as to the reason behind this rapid spike may be related to incestuous exposure in the media. It is also interesting to note that the primary consumers of fauxcest are millennials, those who have the most exposure to popular culture.

When thinking of “family love” in the media, the most common example that comes to mind is most likely the brother-sister love affair between Jaime and Cersei Lannister portrayed in the popular series, Game of Thrones. Not to mention, incestuous families being the product of inbreeding is an extremely popular trope used in many horror flicks such as The Texas Chainsaw Massacre and the more recent, Wrong Turn.

Now let’s face it, when the handsome Jaime and the stunning Cersei start getting it on in all of HBO’s notorious explicit and graphic detail, our libidos can’t help but get stimulated. Whether you’re straight and appreciating the hetero sex of it all, or whether your sexual preferences direct your focus more towards one character rather than the other, the sensuality and eroticism of this scene cannot be denied. In reality, we are all well aware that the pair portrayed on your screen is not in fact related and thus we feel no sense of shame in indulging in the eroticism. But If you think about it, we are subconsciously getting turned on by fauxcest!

The familiarity and normalization of these nonchalant exposures to this societal faux pas may be a contributing factor to the increase in incest interest.

Despite having had a recent splurge in popularity in popular culture, familiar relations between kin have existed since the beginning of time. Within a theological context, the most notorious example of interfamilial breeding is demonstrated within the story of Adam and Eve. As the story goes, Eve was a product of Adam’s rib and therefore the two were not technically related. However, God’s will had stated that the couple were to procreate and be eternally fruitful. It doesn’t take a brain surgeon to conclude that in order for this fertility binge to endure, sibling relations were inevitably formed between the consanguineous offspring.

Continuing within the context of Christian mythology, another evident example can be seen in the story of Noah. Following the flood, the sole survivors were Noah, his wife, his three sons and their respective wives. Again, in order to repopulate the world, some family love needed to occur here. In this case, the family pairing would have been between cousins. Not as closely related as sibling sex, yet incestuous, nonetheless.

Historically, evidence has shown that several ancient Egyptian pharaohs married their siblings in unions which progenerated many offspring. The reasoning behind these ties were in order to protect and secure their royal assets. Aside from the practical and economical aspect of such unions, Egyptians were also thought to have imitated the incestuous unions of their gods. Osiris, the primary Egyptian god of life and death, had been both the brother and husband to the goddess Isis, his sister. Sibling unions were done in order to keep the bloodline pure. Needless to say, all these ancient incestuous bonds were created before any genetic scientific advancement was established.

Why are we attracted to these taboos?

This is a difficult question to approach. Yet, we can all agree that there is something intriguing and tempting about restrictions. Restrictions naturally increase attraction. Forbidden and unknown territory undoubtedly titillates our innate curiosity. As children, when we are told not to do something, the first thing we do when our guardians leave the premise is to do that precise thing that we are not meant to! Forbidding one from performing an act, especially a sexual one, leaves us with an unfulfilled desire that may increase in intensity over time.

As a child growing up in a homophobic household, I can say with certainty that my parents’ disgust towards homosexuality was an undeniable factor that initially sparked my interest in the topic a bit more than it would have for the average lass. The taboo aspect of seeing two women together probably excited me more than it would if my parents had been accepting and open to homosexuality. This is because I knew it was “wrong” (according to parents’ traditional mentality). It was an exciting and naughty thought, and whenever I would see intimacy between two women on the television, paired with a disparaging comment from one of my parents, my developing libido would go crazy!

It wouldn’t be a farfetched assumption to claim that the stronger the taboo, the stronger the attraction. The more we are told not to do something, the more we are compelled to do it. Despite having instances of inevitable incest in the Bible, as seen with the aforementioned examples, incest is nonetheless still forbidden within Christian dogma. Namely, in Leviticus 18:8-18 and Leviticus 20:11-21 we are instructed to avoid incestuous unions. The totality of these twenty-two passages explicitly states the particular relations between kin in which we must avoid. For a Christian, going against the word of god (i.e. the bible) would be quite blasphemous. It is therefore not surprising that, according to Pornhub’s proportion of worldwide traffic relating to the increase of fauxcest porn, the United States of America, the country with the highest worldwide Christian population, is number one on the list. 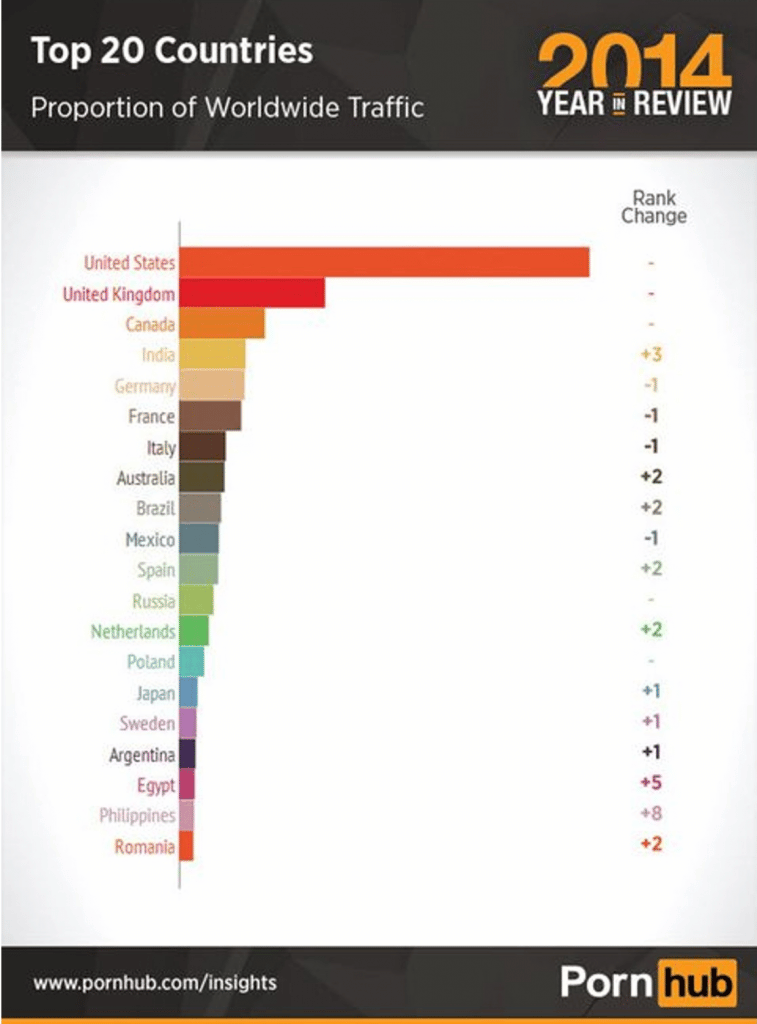 We all have our own personal fantasies and sexual preferences. Sometimes we may go through phases and fixations on certain kinks. Sometimes we may even watch or get off from a pornography category that we normally wouldn’t be into. Perhaps this is due to a random whim of sheer curiosity, or maybe it could be linked to a desire for a change. Perhaps we recently saw or experienced something that is subconsciously manifesting through our sexual expression. Whatever the reason may be, just because we fantasize about something doesn’t necessarily mean that we would, in reality, participate in such an act. It is therefore not surprising that the majority of fauxcest fans do not actually wish to have sex with a family member!

When attempting to analyze the psychology behind sexuality, there is never a concrete and precise answer. We can only conjure up theories and interpretations in relation to specific patterns and statistics. The complexity of the human psyche will forever remain an unsolvable mystery. However, one popular interpretation as to why some are attracted to the kink of incest can be seen in relation to the power dynamics within the family hierarchy.

Dominance and submission, also referred to as D/s, are popular terms within the fetish community. The status of being a dom or a sub in a sexual setting is extremely common and most, if not all sexually active individuals, prefer identifying as one or the other. It is interesting to note that all humans, along with several other mammals, possess subcortical circuits for both sexual dominance and sexual submissiveness. In other words, we all have the capacity of being either dominant or submissive when it comes to sex for pleasure or for procreating. In the fetish community, the proper term for a person who can assume this versatile position is called a switch. Despite being able to possess a desire for both roles, most of us often have a preference. In this sense, D/s is essentially the most widespread sexual kink out there since we all capable of experiencing it on a neurological level.

In relation to family ties, the appeal of incest may be due to the associations of father and mother figures as a representation of authority and power. Those who prefer sexual submissiveness may be titillated at the thought of getting reprimanded and dominated by these parental figures of authority. Parents are the first beings that we encounter on this earth. It is therefore not uncommon that, as we develop, we associate a certain amount of sexuality to our guardians. Parental roles as both a caretaker and authoritarian figure intertwine and may create a sense of safety and dominance.

On the contrary, for those of whom preferring the role of sexual dominance, the thought of a submissive relative may be an exciting thought. Unlike a stranger off the street, a stepdaughter, niece or nephew is obliged to obey the authority of their caretakers to a certain extent.

Keeping it behind your screen

With the appeal of fauxcest on the rise, it is normal to stop and ask, “why?” As with most sexual perversions, there is rarely a clear-cut answer as to why so many of us experience these out-of-the-ordinary carnal desires. Yet, if this fetish is kept in check and remains only a fantasy that you enjoy behind your computer screen, then you should not feel shame nor guilt for something that is out of your control.

The human mind works in mysterious ways and one shouldn’t blame themselves for these cognitive anomalies. In the long run, if no one is getting hurt, it is much more beneficial to attempt to understand the psychology behind a kink rather than beat yourself up for it. (unless you’re into that of course!)