But I’m A Cheerleader: The Cult Classic That’s Just as Relevant Today

Hailed as both one of the worst and one of the best LGBTQ+ films ever made, But I’m A Cheerleader follows the story of a young lesbian who is sent to a conversion therapy camp before she even realizes she is gay. It was released in 1999 in the wake of the murder of Matthew Shepard, a deeply disturbing and public case of LGBTQ+ violence in the US.

Unlike most films of that era, it has managed to stand the test of time and continues to be the game-changing movie that shaped a generation of LGBTQ+ folks.

So with the recent release of the new and improved director’s cut for their 20th anniversary, I’ve decided to do a deep dive on this cult classic!

A Word on the Realities of Conversion Therapy

Since 2019, Canada has been working towards banning conversion therapy, also known as reparative therapy. In the U.S., 15 states have banned conversion therapy for use with minors but there are still loopholes. Religious organizations are allowed to practice conversion therapy across the states. As of May 2020, only 2 EU states (Germany and Malta) have outlawed the practice.

To be clear, there is NO EVIDENCE that conversion therapy works or is safe yet there is OVERWHELMING EVIDENCE to the contrary. Sexual orientation and gender identity have both been removed as mental disorders and mental health practitioners are in agreement that sexual orientation and gender variances are normal. LGBTQ+ people are exactly who they were born to be and nothing that anyone does will change that. The best way forward is to embrace and love people for who they are.

“Therapies” range from talk therapy to downright physical torture. In some places, boys are forced to fight each other and hit as hard as they can or face the wrath of the staff. Survivors of these places have some very horrific stories that make it abundantly clear that these practices are unethical and dangerous.

While some critics disapproved of the exaggerated aesthetic choices, I find it charmingly kitschy in a Beetlejuice sort of way. The opening scenes are noticeably brown, beige, and bland, mirroring the dullness of straight life in the suburban world where the main character, Megan (played by Natasha Lyonne), lives.

At True Directions, the conversion therapy camp, the interior design is hideously bright with monochromatic rooms of stereotypically gendered colors. The girls are dressed in pink and boys in blue. Though these details make the entire movie less concretely realistic, it retains an emotional tone reminiscent of adolescence. 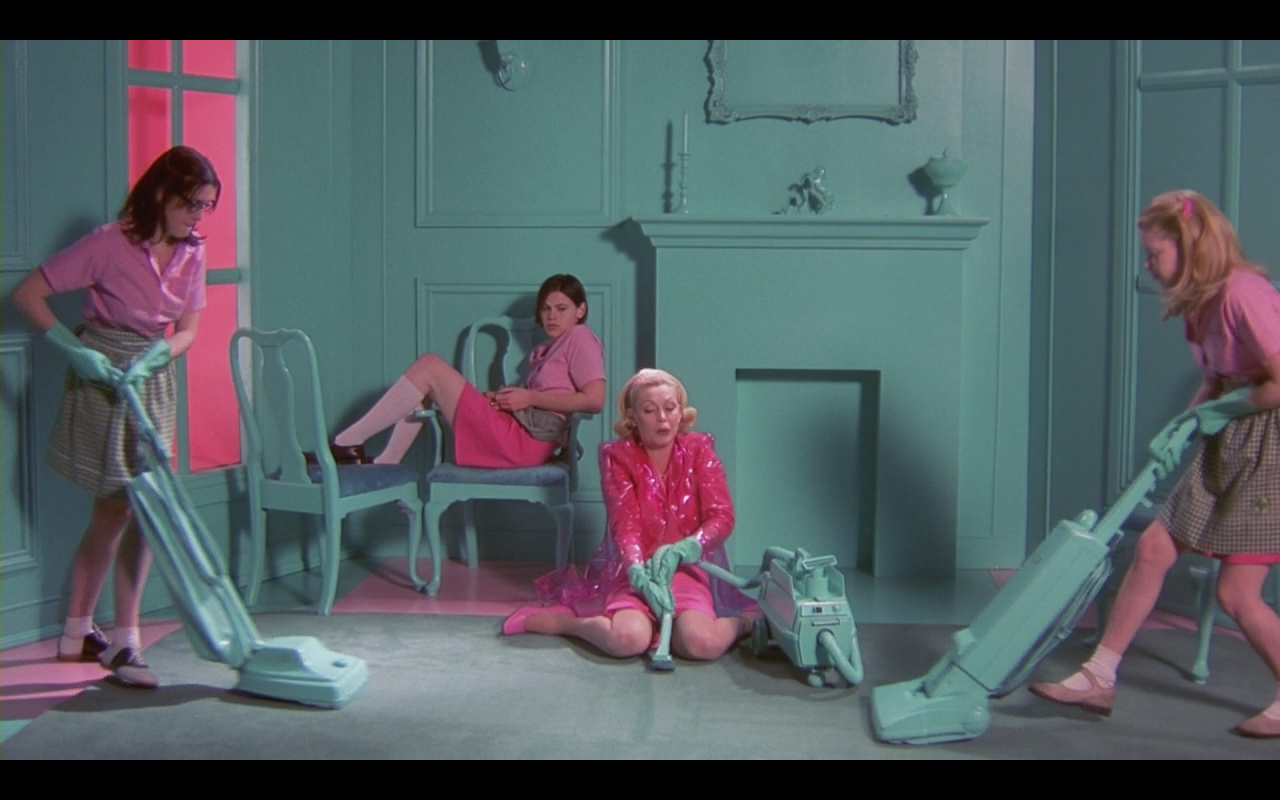 You know how when you feel uncomfortable about something, suddenly you see it stick out like a sore thumb everywhere you turn? As a teen, especially an LGBTQ+ teen, everything feels overwhelmingly gendered and oversimplified. By exaggerating those details, the movie manages to capture the same feelings that queer youth experience, but in a way that every viewer will notice.

At the beginning of the movie, Megan is ambushed into an intervention with all of her friends and family. They had been collecting evidence of her lesbianism and went through these items one by one. Of course, being a vegetarian and listening to Melissa Etheridge doesn’t make you gay, even if there does seem to be a lot of overlap, but it’s such a good scene. I think lots of lesbians will have watched that scene with some hearty chuckles.

In all seriousness though, having your personality held up as evidence of being something that no one approves of is very alarming, to say the least. Even if they didn’t experience such an official intervention, it’s likely that most young lesbians were told they were lesbians before they knew it for themselves. Not only that, but the way this information is received, usually is accompanied by a heavy dose of disgust, anger, or even violence.

An intervention can often be hugely traumatic and since the audience for this film is mostly lesbians (and other parts of the queer community), a realistic depiction might have been too triggering for the audience. The extreme satirical tone allows us to remove ourselves a bit from reality and see it for the comedic elements, like noticing how upset everyone gets about tofu.

The Ridiculousness of The Gender Binary

Along with the ridiculousness of the evidence of Megan’s lesbianism, is the ridiculousness of the gender norms that the campers are bombarded with throughout their stay. The girls are taught to cook, clean, and take care of baby dolls while the boys are forced to play sports and fix cars. What any of these activities have to do with sexual orientation is a mystery to me, yet these gender norms are inescapable.

It makes me wonder how many people have assumed themselves to be gay when really they were trans or simply interested in activities that have been weirdly gendered.

Let’s get one thing, well, uh, straight: gender norms have been imposed on us superficially to uphold patriarchal and capitalist systems. Without devaluing an entire sex (not to mention people of color, too) and relying on them for unpaid labor, our economic system entirely collapses. We are beginning to see this happen already. The systems within which we live could not exist without oppression. And the majority of gender differences are socially conditioned rather than biologically based.

You are not weird for disobeying gender norms. It’s actually the system that’s wrong. You do you, boo.

Fortunately, in the movie, the campers are offered an alternative perspective by a couple of rogue ex-converts who secretly take them out to a gay bar in town. These saviors are a gay couple and they’re adorable. They have a loving relationship built on good communication, accountability, and self-compassion.

They live a short distance from True Directions and some of the campers end up staying with them when they get kicked out of both the camp and their own homes. With nowhere else to go, this house becomes the accepting home they never had with parents who are actually good role models for acceptance and compassion.

All The Girl Crushes

This movie has a powerful cast of actresses, and all of them are crush-worthy. Clea DuVall plays Graham, Megan’s love interest, and she is the butch androgyne of my dreams. She has mastered that forehead-wrinkling, hunched stare that manages to simultaneously scare and excite us. Her style is very intellectual writer meets rebellious badass and we can’t get enough!

Meanwhile, Melanie Lynskey’s character genuinely tries her best to be straight despite being profoundly gay. Her earnest efforts make me want to comfort her as she fails at resisting her own nature. Katherine Towne plays the witchy freak who loves pain and seems to get plenty of it.

Then there’s Jan, played by Katrina Phillips, a super butchy and quiet character who rocks a shaved head and pulls off a super androgynous look. There’s actually a moment with her in the movie that I was expecting to be a trans epiphany, and maybe it was, but it’s largely shown as simply misunderstanding her masculine appearance for lesbianism. And of course, there’s Natasha Lyonne, who plays Megan and has since played many lesbian roles such as Nicky in Orange is The New Black.

All of these women are types of women I’ve seen and recognized in the queer community, though they are exaggerated just as everything else is in this movie.

Hollywood has a long history of having marginalized roles portrayed by dominant-class actors. There’s been black-face, yellow-face, red-face, and plenty of able-bodied actors playing disabled characters, and sexual and gender identities have often been treated the same. Casting is a complicated and large topic that really requires its own dedicated article to tackle, but I will say that it’s refreshing to see a real-life lesbian playing a lesbian character.

Clea DuVall is an out and proud lesbian. She also happens to be the biggest heartthrob of the movie. RuPaul is also in this movie and plays an ex-gay counselor which is just as unnerving as you might expect.

RuPaul is one of the most visible, flamboyant drag queens of modern times. Seeing him dressed down and trying to play a gay man who is denying his identity and declaring himself “cured” of gayness, is in itself hilarious, with a kernel of sadness.

I for one, am incredibly glad that RuPaul is the out and fabulous gay self that he has become. I would never want him to deny the self that has made him who he is, and I believe many would agree with me.

20 Years Young and Better Than Ever

After initially being slammed by horrific reviews upon its original release (even receiving an F from Entertainment Weekly), But I’m A Cheerleader has more than redeemed itself since and become a top pick for lesbians. Director Jamie Babbitt has flourished in her career, winning awards and accolades from her other releases such as Russian Doll, Gilmore Girls, and The L Word, among many other beloved creations.

Clea DuVall has also released a new lesbian love film, but this time, as a director. Happiest Season is gathering amazing reviews and it would seem that the world is finally ready for lesbian love on film. Thank you, Jamie Babbit, for paving the way for lesbians in films to finally get their happy endings.