Many people are quick to jump to conclusions when they hear the term “sex addict.” And these conclusions are rarely positive.

Sexual addiction, unless you have experienced it for yourself, can be somewhat difficult to understand. It is a controversial topic that often gets overlooked and misjudged. Some believe that sex addiction is a myth, some think that it is used as an excuse in order to justify deviant sexual promiscuity, while others unrightfully associate it with bizarre sexual kinks and practices.

It is because of these common misconceptions and this sense of shame and secrecy that this condition often goes untreated, unfortunately to the detriment of the individual and the ones around them.

Sometimes described as a sexual or intimacy disorder, sexual addiction is much deeper than most of us care to understand. For one, it comes in different forms. For one, did you know that excessive pornography use is considered a branch of sex addiction? Even if said person is not actively engaging in recurrent sexual relations.

However, for some, frequent and uncontrollable use is more than just an occasional pastime. Spending hours a day in front of a screen staring into the blissful falsities of pornographic fantasies can become quite problematic when it begins to have negative effects on one’s daily life.

NOT a synonym for hypersexuality

For others, sexual addiction comprises of acting on their desires with multiple partners and being unable to stop doing so, even if they truly want to.

Whether this be done through their own volition of seeking out new partners, or whether they get sucked into the expensive hobby of paying for sex workers, the outcome of true sexual addiction is never positive.

To specify, this condition is not meant to be confused with hypersexuality and this article is in no way a means to slut-shame anyone who partakes in the use of sex workers or those of whom who have a very active sex life. Rather, it is an informative and unbiased approach that may hopefully be useful in aiding those who wish to understand the condition and wish to seek help.

Studies show that approximately 1 in 25 individuals suffer from some form of sex addiction, with the majority being male. It is estimated that 80% are male and 20% female. 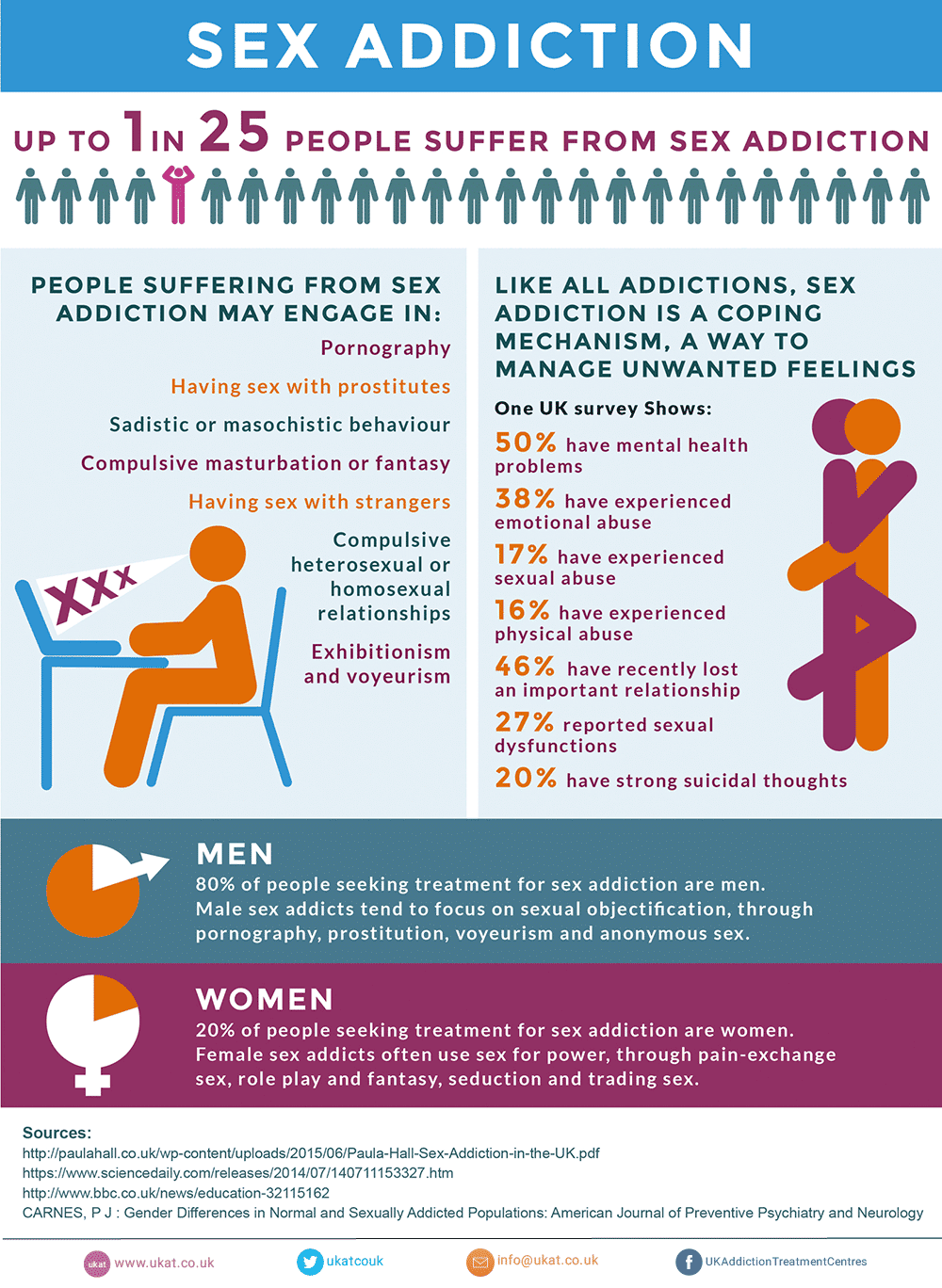 When it comes to female sex addiction, the stigma attached to it is often much worse.

A man may be considered a player or a ladies’ man if word were to get around that he is sleeping with multiple women. On the contrary, I’m sure you can let your imagination run wild with all the kinds of names a woman might get called for such behavior.

These moral judgments that have forever been implanted in our minds need to disappear if we want to help the people who are suffering.

Since most sex addicts fly under the radar and go undetected, you may very well know someone who is internally struggling with this problem. Perhaps even someone dear to you such as a husband, son or friend. The first step we can do as a society is to acknowledge that this condition can really affect anyone. So before passing judgment, think of how you would respond if you found out that this affected someone you love.

The demonization of the sex addict

The negative stigma associated with sex addiction goes even further.

Some hold firm to the uneducated belief that sex addiction is a gateway for criminal behavior such as rape, child abuse and the like. Stigma upon stigma piling up and leaving the victim feeling condemned and helpless; a sexual pervert in the unjust eyes of society.

It is our job as an advanced and educated demographic to abolish these stereotypes once and for all. By removing these connotations, addicts will be more likely to come forward and obtain the help they need to get over their addictions and live a better and happier life.

Instead, they are more often than not embarrassed and worried about what others will think. No one likes to be judged. Especially with such a personal aspect of one’s life such as what they do behind closed doors.

Freeing ourselves from these stigmas and accepting that, albeit foreign to many of us, sex addiction is an unfortunate reality is a stepping stone in paving the way to a more compassionate and understanding reality.

Why we become addicted

Some scientists believe that there is some sort of biochemical aspect that plays a role in sex addiction. The use of certain SSRIs (i.e. antidepressant medication) in order to lower one’s sex drive has proven to be somewhat effective at decreasing desire and thus leads to the conclusion that the make-up of one’s brain plays a part in understanding the issue.

As with any addiction, the addicted brain fools the body into thinking that this self-destructive behavior is good. The body is rewarded with short-lived boosts of euphoric neurotransmitters such as dopamine, serotonin and norepinephrine, every time the dependent behavior is fulfilled or achieved. This makes it extremely difficult to resist the temptations, regardless of how detrimental they may be.

This biological process occurs for any type of dependence.

Even if one is trying to overcome these temptations, it is very hard to get away from the over-sexualized culture that we currently live in.

If one were to spend hours a day getting high on various narcotics, it wouldn’t take very long for the individual to show physical signs of use. Symptoms will become apparent to those around him and friends or family may choose to intervene because of its blatancy.

Sex addiction, on the other hand, is the kind of addiction that may go unnoticed for years. It is a secretive and unnoticeable addiction. It may not initially be hurting anyone in a physical sense, but the shameful burden that the addict has to bear with them has quite the draining effect, both emotionally and physically.

If you or someone you know is struggling with sex addiction, it is important to seek help. With a quick google search, you will be able to find multiple group therapy sessions, counseling, support groups and individualized therapy in your area. Online forums may also be of use.

As previously mentioned, even the option of certain libido-decreasing medication may be what’s best for you.

To conclude, to you, the fellow sex addict, you are not alone. There is no shame in coming forth with an issue and trying to seek help. In fact, that is quite an honorable and brave effort.