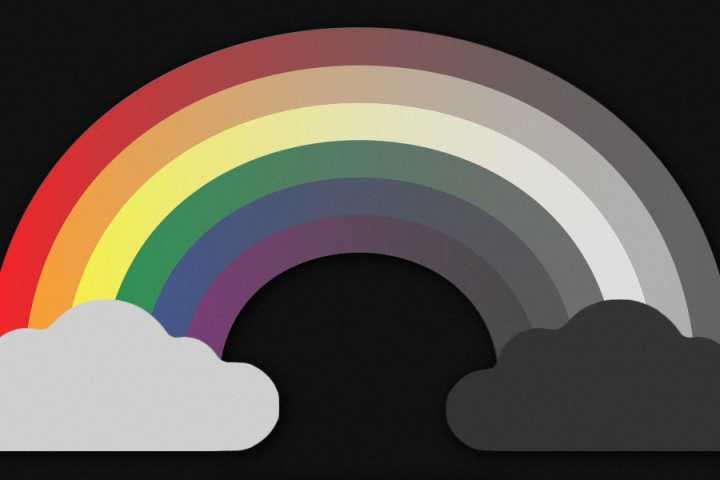 Here in Montreal where the pandemic is raging through its second wave, we see rainbows everywhere. “Ça va bien aller”. “It will be ok”.

Rainbows have also been the most commonly recognized symbol for the gay community since the 1970s. For generations of LGBTQ+ people, rainbows have been a signal of safety, love, and acceptance.

Now, for everyone, it carries a similar meaning. But when you consider how the LGBTQ+ community has been and continues to be impacted by COVID-19, in addition to everything else they cope with, it feels like a grim joke.

According to a recent study on the effects of the COVID-19 pandemic published by SAGE, “LGBT older people experience physical health disparities, often the result of discrimination, which make them more at risk for serious complications from COVID-19”.

If we truly want our rainbows to still mean safety, love, and acceptance, some things will have to change. In order to truly change, we must first understand.

If we take a look at what the world was like 50 years ago, there have been some massive changes in LGBTQ+ rights and acceptance. Homosexuality was only just decriminalized in England and Canada (1967, 1969), and it would be quite some time before gay marriage was even discussed.

In the US, the famous Stonewall Riots (1969) had sent a shockwave through the nation, spurring on the American gay liberation movement. They had started to decriminalize homosexuality in some states, but nation-wide decriminalization didn’t happen until 2003.

Homosexuality and trans identities were seen as mental illnesses. Homosexuality was removed from the list of mental disorders in 1982 and “gender identity disorder” was only removed from the WHO’s list of mental disorders last year. When young people today naively assert that we’ve “won” gender and sexual equality, they’re simply wrong. The effects of discrimination are long-lasting and though it’s now illegal to discriminate against LGBTQ+ folks, it still happens.

In fact, in many places, conversion therapy, which can be remarkably traumatic and widely recognized as torture, is still alive and well. In the 70s, it was commonplace. These practices can range from ice-pick lobotomies to hormonal treatments to electric shock (to hands and genitals) and more.

This discrimination persists today, but in different ways and the pandemic is exacerbating it. These people are often the first to lose their jobs and the last to get hired. Their medical symptoms are minimized if they do try to access medical aid and their housing and food security are even more tenuous than before.

When we hear about older adults in the news these days, there are stories of people not being able to visit their parents and how devastating that is for their well-being.

Same-sex adoption has only recently been allowed (2017 in the US, 1992 in Canada and 2002 in England) and in vitro is very expensive and often out of the question. So, when we’re talking about gay people who are 50+, very few of them actually have children.

In fact, according to SAGE USA, LGBT older adults are 4 times less likely to have children. They are also twice as likely to live alone.

This can be worse than simply not having your usual social support. Many LGBTQ+ folks were disowned by their families of origin when they came out. Others had to make the difficult choice to keep abusive family members out of their lives.

Then suddenly, after a lifetime of living without them, they are suddenly the only ones you are allowed to rely on if you are in need of long-term care or hospitalization which opens them up to further abuse.

Social Change Tends to be Adopted by Youth

LGBTQ+ youth today have many resources to help them thrive, but that hasn’t always been the case. While LGBTQ+ people in their 20s and 30s can enjoy increased protection and more accepting social values, members of this community who are older never really got that.

Youth-focused LGBTQ+ services exist today because of the LGBTQ+ youth 50 years ago.

LGBTQ+ seniors remember times when being themselves meant violence, pathologization, and even criminal charges. So do their straight peers, many of whom still hold prejudiced views and some may even act violently on those views. For those in long term care, they may feel it necessary to go back in the closet for their own safety.

You know those old bigots that many of us are just waiting to die off? Those old bigots are the remaining social group for LGBTQ+ seniors. Gay men who lived through the AIDS crisis in the 80s don’t have many friends left from that time and thanks to rampant ageism, they often are made to feel uncomfortable in popular queer spaces that tend to be dominated by 20-year-olds.

We need more LGBTQ+ spaces for older adults. Places where they can feel safe and meet other people like themselves. It’s great to dismantle ageism in queer spaces, but it’s also important to be able to find others who have comparable life experiences.

Especially as partners age, require more care, and ultimately pass away, social supports from within the community become essential to their own resilience. Covid is causing them to lose their partners very suddenly and oftentimes, they are not entirely out of the closet which means that this immense loss is felt alone.

When we think about older adults, it’s not just that they’re aging and experiencing a physical decline, but they are attached to an older style of relationships that placed all of their need-fulfillment on their single significant other. They’ve placed all their eggs in one basket and once that basket breaks, so do all the eggs.

Losing a spouse is devastating, especially when they’ve been with you for a lifetime.

In the older gay community, they’re not only your everything, but they’re also your co-survivor of extreme trauma. They’re the person who understands how many friends and lovers you lost to AIDS, because they lost them, too. They are your chosen family at a time in history when it was common to be disowned or worse after coming out.

Gay & Grey Montreal, SAGE, and Opening Doors London are LGBTQ+ community organizations that can be a lifeline for those who’ve never been comfortable asking for help from anyone but their own.

Doctors, therapists, police, and politicians all posed threats to the safety of LGBTQ+ people until very recently, and in many cases, still do. The ability to find and rely on each other remains vital to their well-being.

Older LGBTQ+ people were already having a tough time before the pandemic, but now that we are all forced indoors, the situation is even worse. Especially for single seniors.

Given how many LGBTQ+ people have pre-existing medical and psychological conditions as a result of the discrimination they’ve faced, many are especially vulnerable to the disease and averse to leaving their homes. Others maintain the same fearless attitude that got them through their lives and don’t mind putting themselves in risky situations.

Some are tech-savvy, others only use a landline for social contact. With more and more events happening on Zoom, some people are left out of sight and out of mind. Without enough social contact and with social contact, we risk losing our queer elders.

As dire as this situation is, these folks don’t need your pity or even necessarily your charity. These are the people who brought us the Gay Liberation Movement.

They have fought cops who habitually harassed, beat, and arrested them. They have dealt with the violence and discrimination from their bigoted peers long before we came along. They’re badasses.

Throughout their lives, they have had each other to rely on and no one else.

The administration has been against them. Healthcare has and continues to violently abuse them. In many cases, even well-meaning social services have been harmful to them.

This is why support groups have to come from within the community. This is why organizations like Gay & Grey Montreal, SAGE, and Opening Doors London pave the way for LGBTQ+ elders to find each other and stay connected.

In the throws of the pandemic, Gay & Grey have begun collecting life stories from their members and plan to release them in the form of a podcast.

With the pandemic ravaging through their community, there is a sense of urgency to collecting this history. The hope is to use this platform as a way of educating and inspiring youth while also connecting with isolated LGBTQ+ seniors who can listen from home during the lockdown.

The ongoing pandemic has highlighted many areas in which radical change is necessary. Wages are far too low, housing and food insecurity are far too high, and long-term care facilities are ill-equipped to keep our seniors safe.

What can we do to support our LGBTQ+ elders, to whom we owe so much?

Personally, as a bi/pansexual genderqueer woman, I want there to be exclusively queer long term residences. I want to have more services that would allow me to stay in my own home, living in my own way, as long as possible. I want there to be intergenerational queer housing communities where everyone takes care of each other as we create large and extended chosen families. And I want these options to exist for our current elders who fought so bravely for the rights we enjoy today.

“Somewhere over the rainbow, skies are blue, and the dreams that you dare to dream really do come true”