Yet despite all our complex perspectives and narratives, I’m willing to bet that our shared human history can agree on two things: we like to fight, and we like to fuck.

After so many thousands of years, we’ve perfected sexual tastes to a near art form. Much like cooking, humans have discovered numerous ways of exciting our palettes with sexual flavors of the day.

We’ve been enticed by both socially accepted and devious practices from the tame to the near absurd. For every one person that finds more generic teacher-student roleplay to be their most thrilling fantasy, there’s at least 5 more who’s tastes border taboo or impossible.

Sexual fantasies and fetishes seem to operate in a space where social rules or emotions don’t always make sense. In honor of our odd and often nonsensical sexual desires, I present this list of top five questionable sex toys and reasons for their existence.

This list isn’t meant to shame or embarrass anyone (unless that’s your kink)!

I grew up watching documentary-style shows where people with exceptional lifestyles were featured, and this article is made in the honor of those shows specifically. This is an expose, as well as a call for understanding towards folks whose tastes border on the weird.

All fantasies seem a little odd and idiosyncratic. Vox’s documentary series Sex, Explained explores the idea that all sexual fantasies can be broken down into being about power, novelty, and/or group sex. It’s the mix of these three that colors the weird and wild world we live in, as sexual people.

So let’s jump into the wild world of niche fetishes! 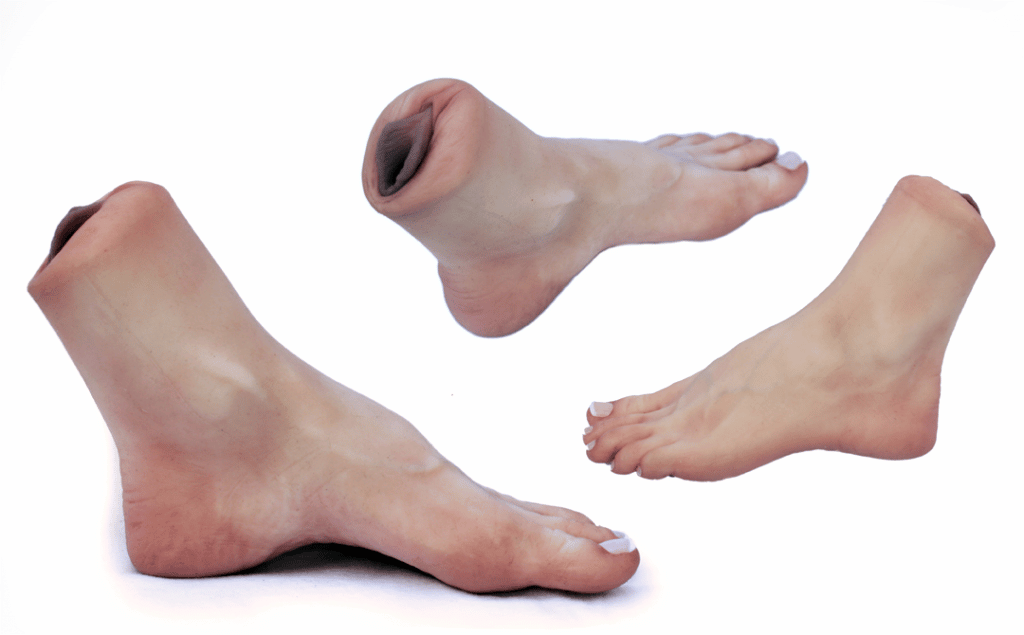 I was watching an episode of Vice’s show Slutever where host Karley Sciortino was diving deep on the subject of sex dolls. She was visiting California based doll-maker Sinthetics when they introduced an unexpected and almost gory looking item… the Vajankle.

Let that settle a little bit before we continue. Vajankle.

It was exactly what it sounds like: Vagina + Ankle = Vajankle.

I’m not trying to yuck anyone else’s yum. Feet just never particularly appealed to me. In fact, feet were just plain gross to me. It seems like I might be the only person I know who doesn’t like feet at all.

It’s always perplexed me to no end when I met people who would divulge that feet were one of their erogenous zones. My feet are definitely not an erogenous zone for me or my body. They’re more like a danger-zone, where I risk hurting someone because they’re incredibly sensitive.

No joke! A partner once tried to touch my foot in a seductive way, but I panicked and accidentally kicked him in the sternum. His chest made a hollow thud, and we both looked shocked. (I can’t be positive but I’m pretty sure I narrowly escaped a manslaughter charge that day.)

However, we can’t ignore that foot fetishes are one of the typical common kinks in our shared human history. Problematic daddy of modern psychology, Sigmund Freud, even wrote about them. Despite the long history of foot fetishes, there isn’t one single theory as to why humans are just so enamored with feet.

One theory is that humans tend to flock to feet during times of spread of disease. Dr. A James Giannini from the Ohio State University speculated that humans show an increased interest in feet when we collectively go through periods of socially and sexually transmitted illnesses like during gonorrhea epidemics or during the AIDS Epidemic of the 1980s. It’s worth noting that these times are also times in human history where women become more powerful in society.

There’s also the theory that human genitals and feet are related to each other on the neurological “map” of the nerves in the body, as demonstrated with the cortical homunculus. For some people, there might be some messy overlap between sensations for the genitals vs the feet, and this might leave some humans with an foot stimulation association. This theory is a little polarizing, as many people are critical that the neurological map is too simplistic to be completely accurate.

I think we can be sure, however, that if society has another foot fetish boom after we exit the Quarantine Times… well, we can assume which theory is right. 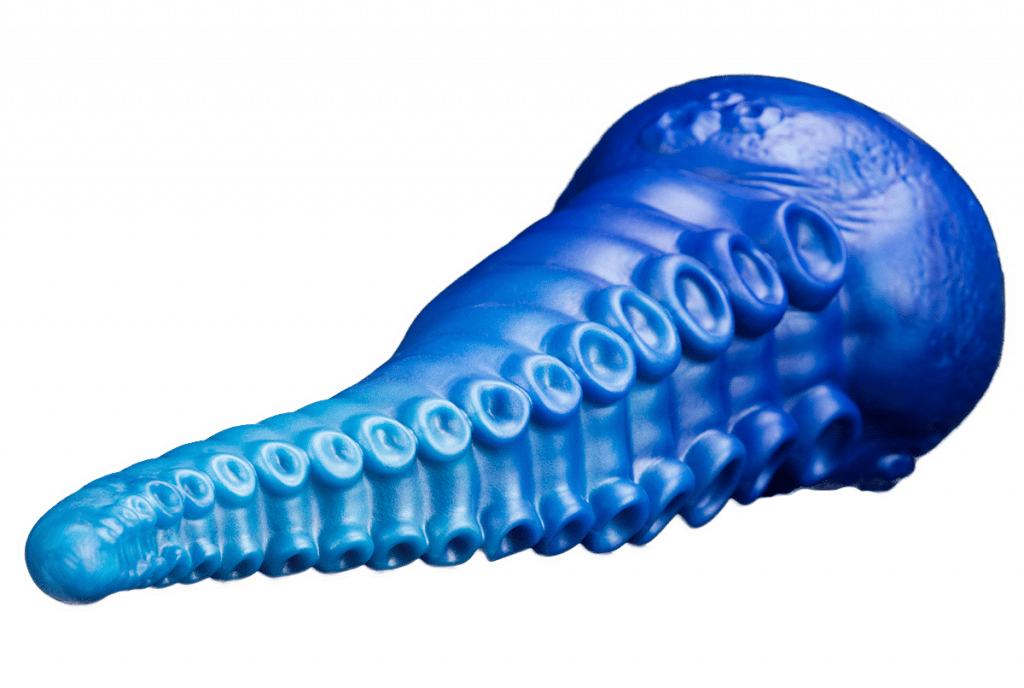 Heck, it seems like every cam model online has a tentacle toy!

Attack of the Fly: Ovipositors 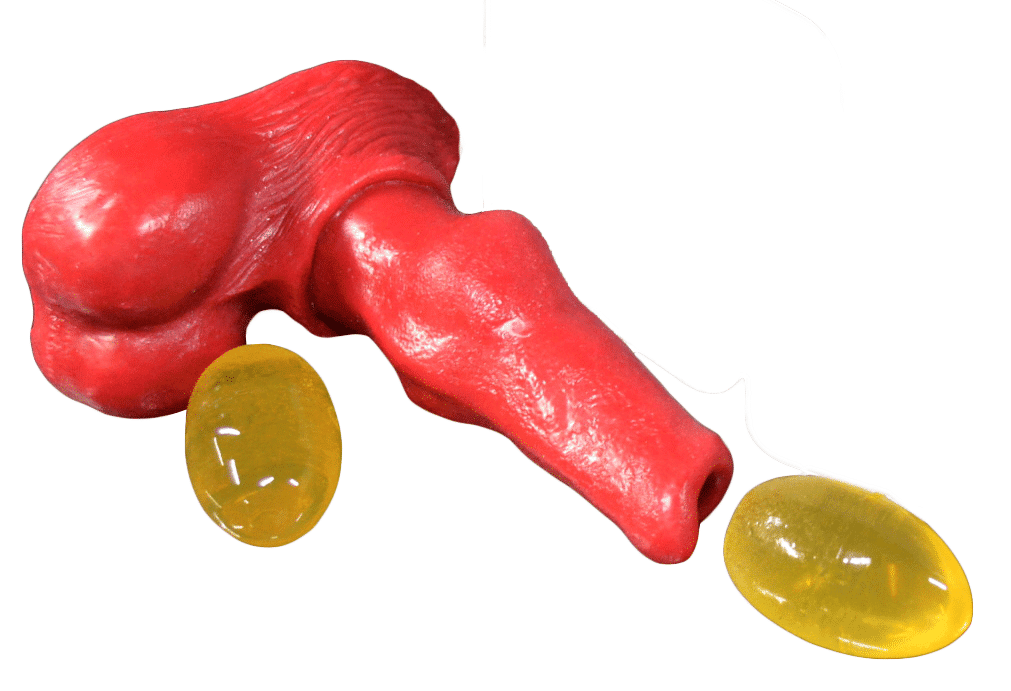 Jeff Goldblum. He’s a heartthrob even well into his silver fox years. Most people would point to the movie Jurassic Park as the seed of their Goldblum Fever, but a select few would say it was his role in the quintessential science-fiction movie The Fly that got them hot and bothered. Those people probably own an ovipositor.

I joke! It’s more likely to be the Alien franchise fans who find themselves using one of these phallic egg-laying silicone devices.

The interest in ovipositors and the fetish as a whole is tremendously recent. For many people, it encompasses a lot of elements they already enjoy immensely: sci-fi, horror, and androgyny as the ovipositor both penetrates and inserts eggs into their willing victim’s body.

The internet has been a gathering place for folks with particular sexual tastes for a long time now. People are able to come together and organize online, and create catalogs for conceivably every fetish ever possible.

The first company to create (and patent!) these toys were indie silicone company Primal Hardwere. Once it became known to internet dwellers, it quickly got the attention of popular online sex shows like Slutever, or Sex Stuff with sex educator Zoë Ligon.

Geeks and nerds, in particular, were intrigued by their concept: an alien insectoid penis-like member that would also insert eggs into your orifice of choosing. It blurred gender, sex, and science fiction. What a millennial fantasy!

The customization possibilities are endless, as the eggs need to be made at home in their own plastic mold. Eggs can be large and shaped like a chicken egg, or small and spherical. They’re gelatin-based, so they promise to melt out of the body and be expelled without any issues besides leaving a slimy mess.

You’ve probably seen this quintessential quarantine meme floating around. A woman clad in head to toe black latex while wearing a gas mask teeters confidently in platform boots while shopping for groceries.

The photo was so popular it was even passed around on family-friend Facebook where people reacted surprisingly positively. Comments ranged from “smart!” or confused and interested.

Rubber and latex suddenly seemed in vogue. People were intrigued. And in the immortal words of Dean Pelton from Dan Harmon’s hit series, Community…

But it did awaken something in us. By mid-March, searches on Google for “rubber kink” and “latex fetish” were at an all-time high. There are no surprises here; a global epidemic has left us feeling a little exposed, and skintight latex suits seem to be the cure for wanting to keep ourselves both safe and sexy.

Latex and rubber kinks are a typically 20th-century fetish. By the mid-1950s, thick and sterile materials like PVC or latex were no longer seen as exclusive to their sterile medical or manufacturing origins. In fact, for some people, the association with the medical industry actually made them more sexually interesting.

The fetish grew in popularity again in the early 1970s when famous British fashion designer, Vivienne Westwood, took the material from fetish to punk and supplied future goth and punk communities with the iconic look that would define the aesthetic for decades.

The latex and rubber scene is also a very queer fetish, as many gay men in the mid 20th century flocked to the material. They were known as “rubbermen”, and the material provided an amount of discretion as well for folks living in homophobic times.

There are arguably a few materials that are reminiscent or exclusively sexual in nature, and latex is one of them. 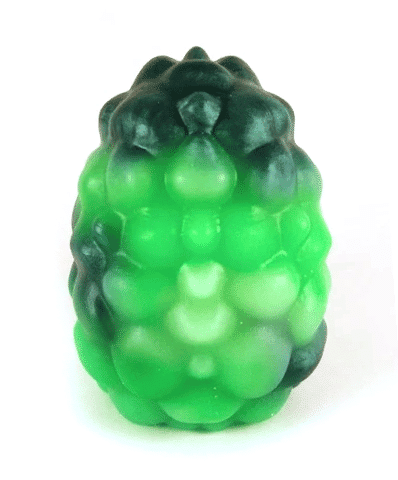 If you haven’t heard of actor Gwyneth Paltrow’s “health and wellness” brand Goop, well… you must have been living in an early self-imposed quarantine because it’s been a staple in our media diets for years now.

One of the early mainstay products that garnered her a metric ton of publicity is her sexual wellness “solution”, the jade yoni egg.

The solution is simple: are you feeling sexually blah? Is your “eternal sexual lifeforce” lacking a little zing? Are you struggling to choose doing your partner over doing the dishes? Well, does Gwyneth have a product for you: the jade yoni egg. For $66 USD, the crystal egg-shaped device promises a perky pelvic floor and a more spiritually enlightened crotch. 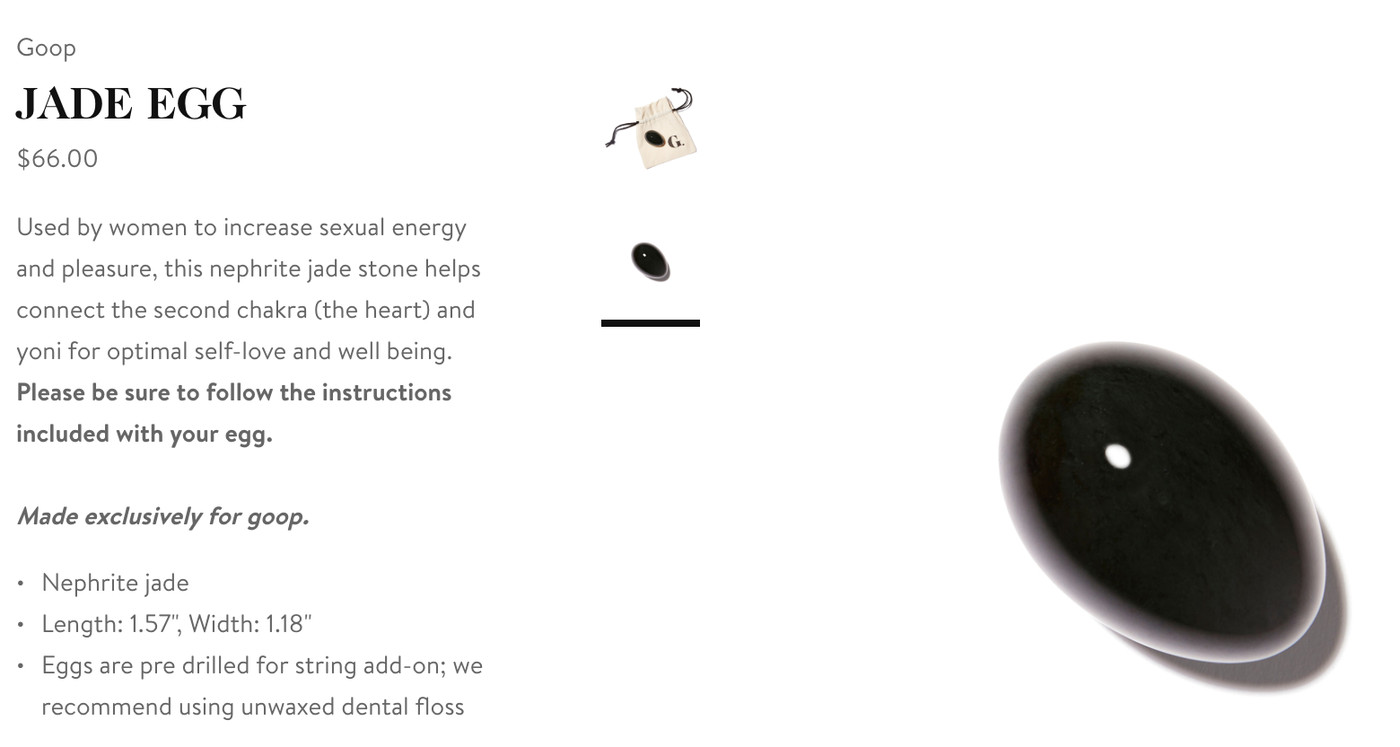 The extreme claims made by Goop were so jaw-dropping that in 2018, Goop was ordered to refund purchases of the jade yoni egg and was fined roughly $145, 000. Ouch.

It’s not all false claims though! While the jade egg was flawed due to pseudoscience claims and the product being made out of porous, unsafe jade, studies have shown that kegel weights inserted into the vagina can help recover or increase muscle tone and bladder control. 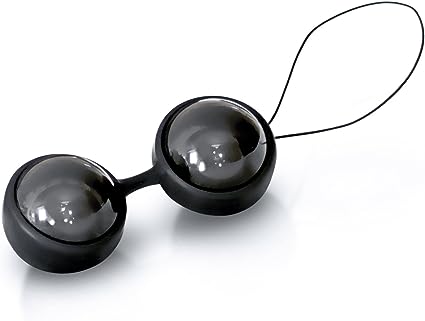 However, in the last few years, independently-owned adult toy companies have started offering their own fantasy-based alternative to porous jade or rigid metal balls: silicone eggs. These eggs are slightly lighter than traditional kegel balls but offer interesting textures, shapes, and sizes.

After visiting the topic of oviposition above, you might be wondering how these silicone eggs differ from the eggs for an ovipositor. Good question and I curse both the internet and my bottomless boredom that I know the answer. Ovipositor eggs are meant to be dissolved by the body and expelled out while silicone eggs are meant more for longterm and reusable use.

Sure, these eggs don’t promise to restore your cosmic sexual energy and wellness, but on the plus side… you’re not giving Gwyneth Paltrow money to monopolize on illness, and that alleviates my depression at least a little bit.

All in all, human sexual interests are specific and puzzling, and a quick search of sex toys on Wish will prove that to almost anyone. Sexuality and tastes ride a kind of odd tightrope of disgust and intrigue, and of risk and reward. We aim to protect ourselves and our sexual pleasure while also creating a sense of novelty and risk, and this balancing act can leave us with some sometimes odd interests.

If you’re someone with a novel sexual kink, that’s okay! Explaining your interest to your partners might help you meet them in the middle, but you’re not obligated to explain your tastes to anyone. Everyone has their own odd interests, so do not let anyone shame you for any niche kinks you might have that do not harm others.

It’s like food: not everyone will share the same culinary tastes, but so long as we don’t go around shaming each other for indulging in them, maybe we can create a more tolerant and less sexually frustrated world.