“Wait… what the hell is that?”

I could tell from his tone my date clearly wasn’t someone who was familiar with furniture typically found at motels that rent by the hour.

So of course, despite the fact that I was completely head to toe in glorious fetish gear, the first thing he noticed is…  the sex chair. Classic. Here I am, looking like a goddamn queer vision, wearing a transparent black catsuit, equipped with a Pussy Riot inspired pink hood, and overdrawn drag lipstick…

And yet he notices the damn chair first.

To be fair, it was a peculiar chair, to say the least. 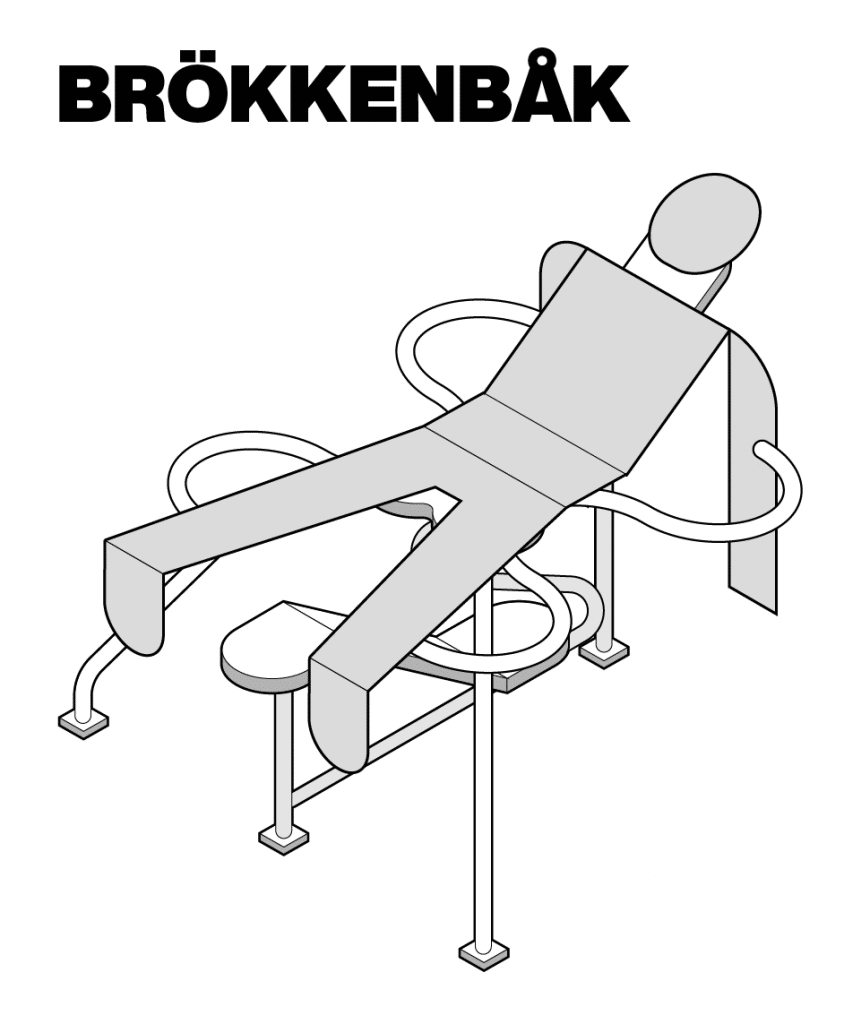 Standing there, it was unabashed and awkwardly splayed out like an overly confident park flasher. It was an odd, almost octopus-shaped chair, with two seats and had two well-thought-out towels folded on the benches. I would say it was discrete, but that would be glaringly incorrect by the actual fact that the seat was shaped like a dick and testicles. The entire frame was made out of metal tubing painted slick with a coat white paint, and the seats were made of a dusty red leather, no doubt cracked from the sheer amount of use.

I won’t lie: initially, I thought it was some piece of workout equipment. It looked like a distant ancestor of the Bowflex left discarded, only to be perverted by bored kinksters at a highway motel. (A tragic but likely inevitable end for many pieces of workout equipment, no doubt.) 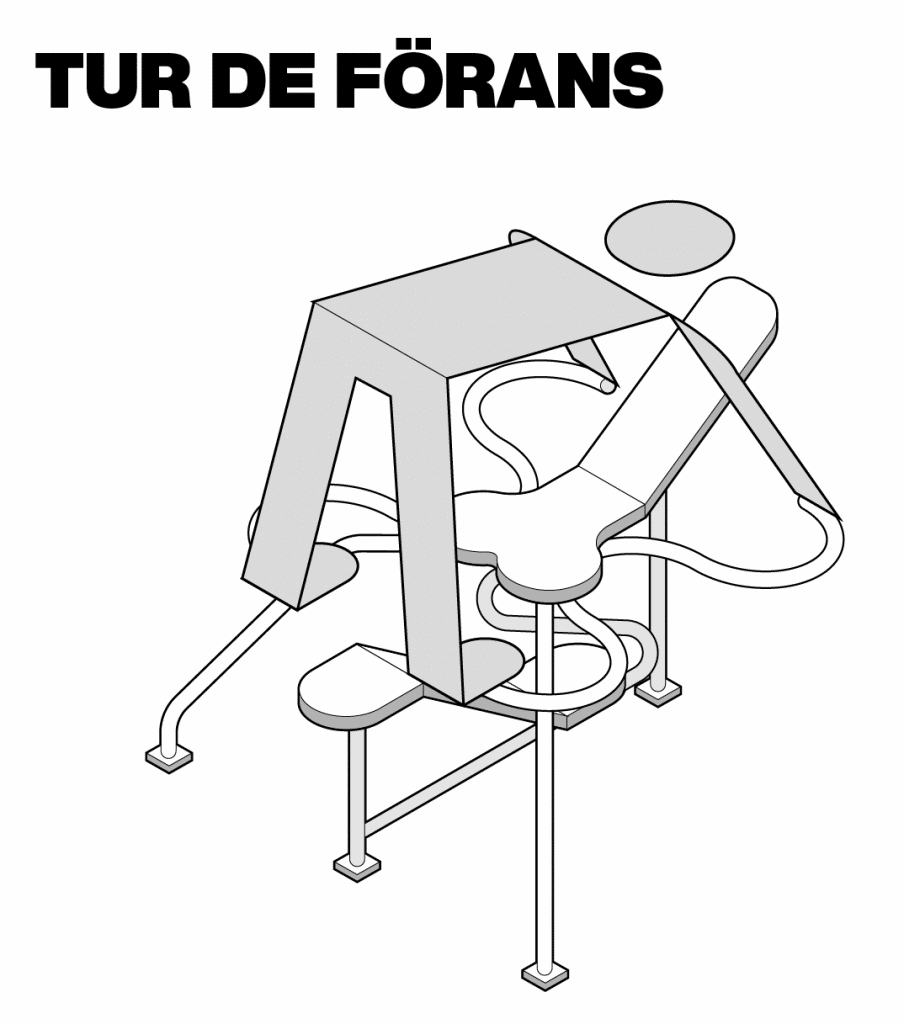 However, upon closer inspection, I realize I have no idea how this thing works. At first glance, there are no moving parts, no stirrups, and frankly, I can see no real reason for its existence.

What was this chair?

The search for truth

My play partner decided to opt-out of using the spectacularly intriguing seat, choosing to remain on the more familiar territory of the bed.  In my car driving home, I start thinking about the experience. As a whole, the play session was quite surreal and positive, but yet… that chair still remained an absurdist cherry on the whole sexual sundae.

I had to know more about that chair.

When I arrived home, I quickly showed my friends the picture I took of the room, and asked for their opinions on the throne. The looks of confusion and exclamations of, “okay… no wait, what?” told me they were just as perplexed as I was. No one could make sense of the seats, and as we debated, we each turned into furniture and human anatomy specialists, furiously hammering out the physical logistics. 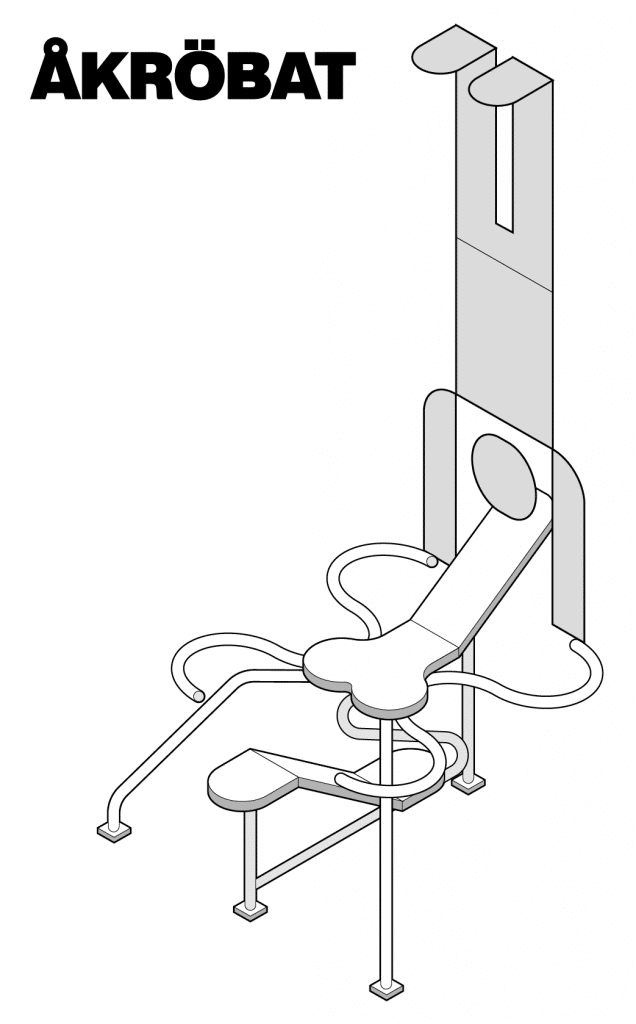 So I did what anyone would do when confronted with a piece of confusing cheap sex motel furniture: I started researching it.

The sex throne was sold in popular men’s magazines at the time, and apparently, even the famed Nina Hartley used one in one of her famous sexual “How To” video series though I couldn’t find any images of one.

Luckily, the internet did not disappoint.

I was able to find modern versions of the chair on amazon.com, and Wish, where it was sneakily advertised as an “octopus chair”. One reseller included instructional images with a silicone sex doll sitting in place, but looking at the doll’s lifeless eyes and uncomfortable expression… it just seemed sinister. The wooden handles reminded me of the giant 80-foot metal tarantula in Wild Wild West.

I was confused, maybe a little aroused… but these weren’t my chair, my luxurious fuck throne that now was the centerpiece of fantasies that were more about problem-solving than any real desire. These chairs were modern knockoffs, saccharine substitutes that could never match the Real Deal.

I knew what I had to do.

I had to revisit the chair. 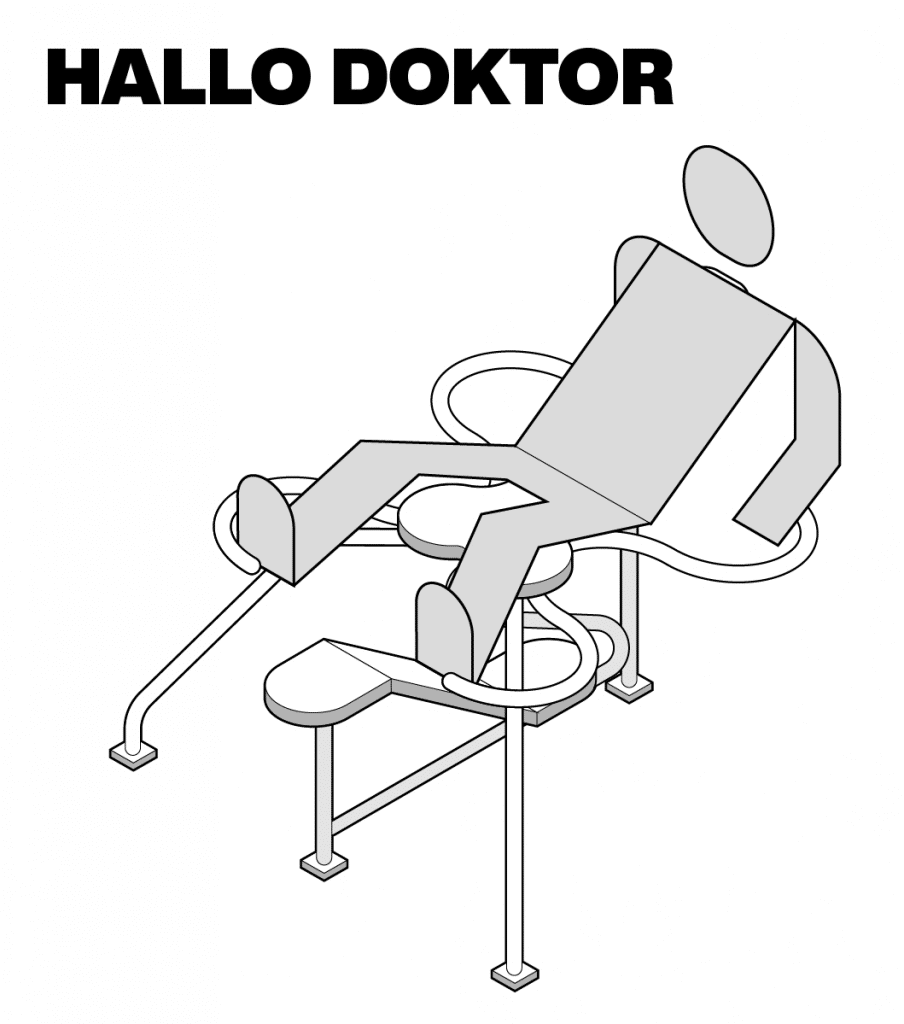 The motel was located in an industrial area next to a strip mall with a budget grocery store, a local sports bar, and a strip club. It had an oddly charming and anachronistic way of feeling comforting, not unlike rewatching a VHS tape of an old 1980s slasher flick. You knew what to expect, and weren’t surprised when it happened.

I remembered how lost I was during the first encounter with that chair, so it was only natural that I would enlist my dear friend and fellow writer Anna Franco to help solve this sexual mystery.

The lobby of the motel was small and empty. My heart was humming nervously, or maybe that was the old broken soda machine in the corner of the room. I thought about what I would say, and rolled my words around in my mouth until a tall middle-aged man with fantastic grey hair walked up from behind the glass counter. 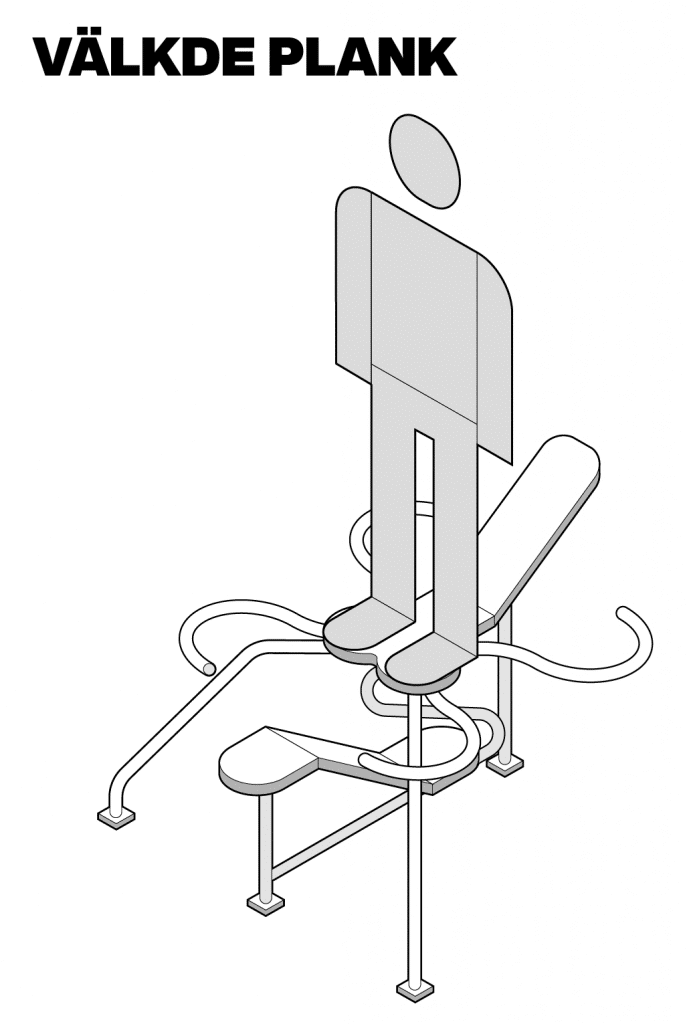 “Uh…hi,” I said anxiously losing all sense of purpose, “I was here a little while ago, and I was in a room… with a kind of… special chair?”

The guy’s eyebrows went up in recognition, but he kept his poker face and said nothing in response.

“I’m just wondering,” I continued, “Would it be okay for us to see the chair for only a few minutes? I know it’s a little weird, but we’re just trying to figure out how it’s supposed to be used… We won’t do anything, I promise.”

The man at the desk looked serious for a moment and turned away. I thought he was refusing my request until I saw him go to the wall of keys, take out one, and hand it to me.

“Be back in two minutes, okay?” he warned politely, a mischievous twinkle in his eye.

Anna and I thanked him profusely and quickly walked to the motel room where that fateful encounter happened. No, not with the guy… with the chair. The chair is clearly the main character of that sexual experience, and that’s no shame to that guy but it’s hard to upstage such a rare and weird beauty.

We unlock the door, and the familiar sweetness of a musty smoking rooms hits us.

There, bolted to the floor, is our throne. Our glorious recliner. The seat of power. The captain’s chair.

It’s a strangely solemn moment as if we’re in the presence of the last living sabertooth. 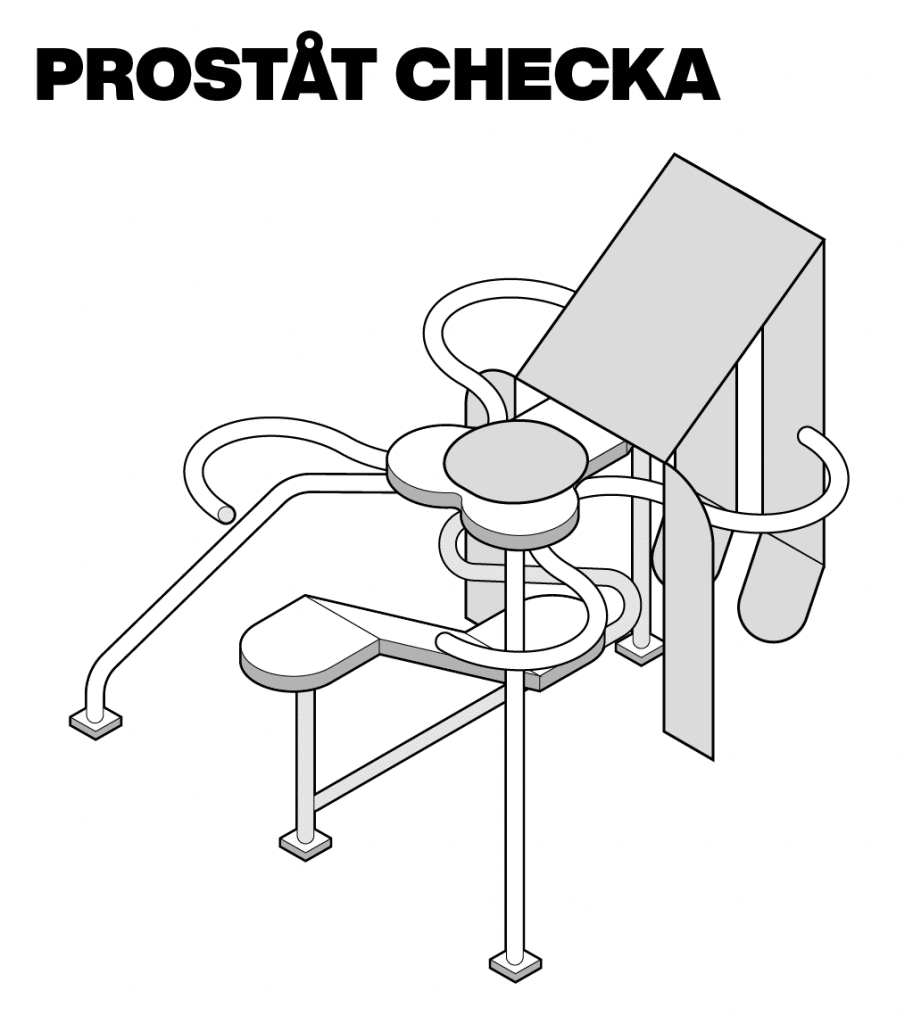 Immediately, Anna speaks up and knows exactly how it’s supposed to be used. In full clothing and leather boots, she climbs in the largest seat– you know, the one shaped like a dick— and begins to untangle this sexual Rubix cube.

Unbelievably, it adjusts. It seems to be able to seat more than two people at a time. Anna spins around like the newest member of Cirque du Soleil’s burlesque division, a blur of limbs and possibilities.

Suddenly, this chair doesn’t seem so ridiculous after all.

In a matter of minutes, Anna has figured out a multitude of positions, many of which open up the possibility of including more than one partner (polyamory and kinksters unite!). The chair could be used to give the person on top oral sex from a variety of positions, penetrate a partner from behind whilst standing up, or have four people interlocked in a passionate pretzel position. There’s even the aspect of using it for disabled kinksters, who could benefit from the reduced strain! Really, the possibilities are limited only by your imagination.

We bounce back to the front desk clerk, who gives us a relieved smile likely noticing that our clothes are still on straight. Anna and I leave the motel in high spirits, converted by the power of the sex chair. We were ready to proselytize and sing our praises to the world.

Come! See the strange and iconic metal fuck chair from a time long gone, where sexual freedom and naivety for the future reigned supreme. It might not be a working time machine, but as the only living relic of the unabashed sexthusiasm of the 1970s, it’s the closest one we’ve got.

If you’re interested in furniture that helps make you and your partner moan but aren’t interested in a road trip to your local motel, you should definitely check out Liberator’s products.

They have a range of pillows, ramps, and wedges to help squeeze you and your lover(s) into all sorts of deliciously naughty poses or hold vibrators when you or your partner’s hands are tied.