The Road To Polyamory: A Journey Through Self Discovery

In 2012, I was married to my high school sweetheart and we were completely, faithfully monogamous. We had both grown up in a small, conservative town and though we were both somewhat radical and progressive within that community, that wasn’t saying much. It was the kind of town where most women were stay-at-home moms and the men always went out drinking and hunting with their buddies. Gay kids were disowned. Trans wasn’t in our vocabulary. “Cheaters” were ostracized with little more than rumors to back up the claims. Polyamory wasn’t even a thing!

So, I married the most radical-thinker that would have me and we were pretty happy for a while. We lived in an actual city, a small one, but a city nonetheless that had lots of highly-educated, open-minded folk and in this new environment, I was eager to explore.

My upbringing taught me a lot of things I had to unlearn. One of the basic false assumptions I had was that the right partner would be all I would ever need to be completely satisfied in every way. That’s a big assumption, but it’s one that a lot of us just accept through lots of social training. We are taught to expect that the “right person” will satisfy all of our needs and that it will be our responsibility to satisfy all the needs of our partner. If anyone is left unhappy, it is a failure that one or both of us had. I knew that I loved my husband, and he loved me. I also knew that I had a “wandering eye”.

My response, which I think is a common one, was to shame myself for having very normal human feelings. So please, if you’re reading this and you feel somehow broken because you want more than the relationship you have, know that you are not broken.

Humans are social creatures who need plenty of physical, emotional and spiritual connection. I don’t know what the “ideal” social network for people looks like or if there even is one, but we do know that in North America at the very least, our social networks are much more limited than we need them to be. Millennials are especially affected by this. As we spread ourselves thin working on many things at once with little to no pay and often alone, much of our social contacts have changed from face to face hangouts to almost exclusively texting. Scientists have shown that physical contact is essential for our health, recommending 8-12 hugs a day. I’m not going to shout from the rooftops that polyamory is the answer, but I think that for some people it can bring our social connections to a better place in our lives.

We Need To Talk

I had a real hard time articulating what I was going through to my husband, and for a long time I remained silent. I had kind of been aware of open relationships but had never met anyone who openly had one so it felt kind of like this mythical legend rather than a real relationship I could have. We had never really talked about any of the things I had been silently questioning so I didn’t know how he felt about any of it. It was a huge risk. He might have already been thinking along those lines, or he might be very hurt to discover that I was.

Within patriarchal society, straight, cis, hetero men are raised to claim ownership over their women. The social structure of the West rewards power over women and shames men who “allow” other men to gain control over their property. Though we generally agree on a conscious level that men don’t own women, that women are free, a lot of our social training is still rooted in patriarchal law. My husband was a normal man, raised to ensure that other men don’t usurp his power over me. I don’t believe that he was thinking in those terms, but I do believe this is why men tend to be more comfortable with opening their relationship to accommodate multiple women rather than multiple men (which explains all of those couples on Tinder looking for a single lady to enjoy!).

The initial conversation was rough because to him, my wanting new and different and from elsewhere was an attack on his adequacy. He had also been fed the false truths that I had been fed, believing that we should be enough for each other. In the end, to his credit, even though it clearly scared him, he cautiously agreed to test the waters.

I learned a lot during this time about deeply felt emotions and how to process them. I also learned that this path was not an easy one for my husband. In fact, this path seemed nearly impossible for him. If we did things his way, I would likely never have the kind of relationships I wanted. If we did things my way, that would be just as disappointing and terrifying for him and possibly traumatic. We wanted different things. So there I was, 7 years into our relationship and I had found a fundamental incompatibility. There were other factors, but this was a big reason for me to walk away.

I knew that I needed to explore this side of myself and I also knew that he couldn’t come with me on this journey. It was very hard to separate, but once we parted ways, I began to discover so much about myself I never could have known before. Though I am very grateful for that relationship, I am also very grateful for its end.

A Note On Power Dynamics

We all know relationships can be tricky. There are a lot of powerful emotions at play and we aren’t always prepared to deal with them. Often times we will say or do anything to keep our loved ones around, even if it is at great cost to ourselves. Among the things our culture tells us to do is not to give up on love. There can be a lot of shame associated with the end of a relationship and shame is a powerful emotion.

No one should be pressured into an open relationship, just as no one should be pressured into a closed one. It’s not always easy to tell when someone is sacrificing a lot for you but it’s important to be aware that they might be. Every situation is unique and no one will understand each one better than those directly involved. So please, look out for each other and communicate as clearly and compassionately as you can. 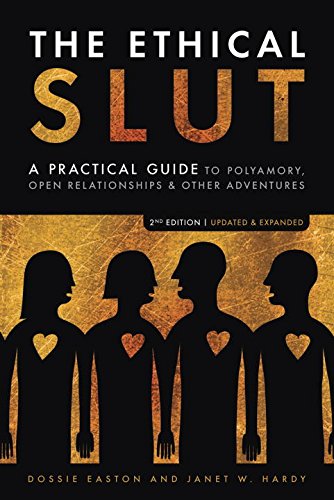 I think, Poly or not, everyone should read this book.

I found it to be profoundly validating, infinitely enlightening and it just filled me with such hope and excitement for the future. It taught me a lot about listening to myself and taking responsibility for my own feelings and for my own happiness. It helped me to shake off my shame and self-judgments while also inspiring delight at the thought that there might be plenty of non-monogamous relationships out there that I just didn’t know about. (Spoiler alert: there were!)

I started having conversations about polyamory and reading whatever I could online. I read Cunt and Gender Failure and really invested myself in my own personal discovery. I journaled a lot. I fantasized about ideal relationships and how they would work. I imagined myself co-parenting while dating. I had conversations about raising children with entire communities and my mind opened up to possibilities that felt so much less alone than all of my previous relationship examples had provided. I began to feel like there was hope for something different and I finally didn’t feel ashamed of wanting it.

At first, I found it hard to label myself as poly because I was single and I knew people generally understood poly to be an established group of lovers (if they knew anything about it at all). Soon, I found myself in relationships with couples and casually hooking up with singles. It felt a bit odd. Each couple was different and I felt differently about each person involved. I didn’t know how to date one person while not wanting to date their partner, or how to be honest within each relationship without betraying anyone’s trust. I didn’t know what each person wanted from me or how to talk about expectations. More often than I would like, I was either treated as a new toy in the couples’ sex lives or put on a pedestal, sometimes driving a wedge between them.

When our lifestyle aligns with the mainstream, there are scripts to follow. We know what social norms exist for gender, sexuality, and romance. We see these things depicted in the media and the world around us constantly. It can be easy to fall into these scripts unquestioningly. It can be scary when you realize that these scripts don’t work for you, but the cool thing is that scripts can be rewritten!

Over time, I started to learn how to communicate my boundaries and expectations as they occurred to me. I really started to appreciate the wide variety and complexity of relationships, especially once I had a few happening at the same time. I also learned that poly comes in all shapes and sizes and is completely customizable! There is no one way to be poly, but at the core of all of them must be open and clear communication, mutual respect for everyone involved and ongoing, enthusiastic consent.

New to polyamory and looking for tips? Looking to explore and have fun without leaving a wake of emotional destruction? Well, next month I will be going through what I’ve learned and sharing my best advice on how to keep you and your loved ones safe and happy and learn some common mistakes and how to avoid them. So, stay tuned and see you next month!