Is There Something On My Face? Femme Presentation & The Changing Male Gaze

For the past few weeks I’ve been experiencing a strange phenomenon. As I walk or bike down the street, I’ve noticed dudes staring at me, or abruptly saying hello as I go about my errands. There is nothing intrinsically wrong with this, other than the fact that when people stare at me, I tend to become convinced that there is some schmutz on my face.

But I’m a pretty social person, and one of the few things I’ve missed about living in a small town is the way that you can greet strangers without them thinking you’re possibly a serial killer. So, an increase in the number of “hellos” I get in any given day tends, on the whole, to make me happy, though I could have done without the elderly man who moaned “ohhh, you’re pretty” at me as I crossed the street this morning. I also know that this experience is practically universal among women, especially women in their twenties and thirties. But until recently, it was a phenomenon that I had mostly managed to dodge.

At first, I was inclined to blame the change in the weather for this development—it has been hot as hell in Montreal, and humid too, and like any poor, pretty Montrealer, I’m wearing the absolute minimum amount of fabric I can wear without receiving a citation for indecency. But dressing like that is not new for me, and these reactions definitely are.

The answer finally hit me as I was biking through Mile-Ex—a maze of poorly maintained streets north of my neighborhood that winds its way towards the public pool where I swim several times a week. My hair. My hair is currently just a touch longer than chin length. I’ve been growing it out for a few months, after three years of letting my best friend shave my head in her bathtub once a month or so. And the sudden solicitousness of strange men coincides much too perfectly with my hair hitting that just-past-chin-length stage to be a coincidence. Still, I wasn’t prepared to draw that conclusion definitively without finding out whether this was an experience shared by other women.

Increased quantity, but not quality

I spoke to two of my best friends about this—one of them, a tough, smart translator and mixed martial artist, had a short pixie cut when I met her in a kung fu class six years ago, but now her hair well past her shoulders. She dates primarily men and has definitely noticed a difference in how they treat her with long hair vs. when it was short.

It’s not necessarily that more men are attracted to her, she told me, but rather that the kind of men who approach her are very different. They tend to expect a kind of traditional femininity from the long-haired version of her, and are inevitably disappointed and unnerved when she turns out to be a card-carrying bad-ass. They are also more likely to approach her in the street at random, rather than because they share a social circle or hobbies that bring them together. This makes a kind of twisted sense—for people who have particularly essentialist ideas about gender and gender roles, one woman is as good as another, more or less, so they may be less concerned about establishing shared experiences or interests.

The added attention doesn’t really lead to more opportunities to date, even for mostly-straight women, since the increased quantity of random approaches doesn’t result in a commensurate increase in quality.

The other friend I spoke to currently has very short hair, shaved on the sides, a look she went for recently after years of longer styles. Her haircut serves as a welcome beacon for other queer women, a sort of lesbian lighthouse to guide ships that might otherwise pass in the night safely into harbor. One of the things she’s enjoying about her current look, other than the fact that it’s a stone-cold babe magnet, is the fact that it’s resulted in a marked decrease in male attention as she goes about her daily life. She still notices men looking at her from time to time, but the rate at which they approach her has diminished significantly—she considers it a time-saving benefit for everyone involved.

This is very much in keeping with my experience with extremely short hair, though my general obliviousness to the world around me meant that I often didn’t even notice men looking at me unless it was pointed out to me. The looks that my more femme appearance have been attracting are significantly more overt—tragically, I think my long hair is making me a lot less intimidating.

Studies on the effect of women’s hair length on straight and bi men’s attraction to them seem to suggest a positive correlation between longer hair and increased male interest. A Hungarian study published in 2003 suggested that the effect was connected to ideas about health and fertility.

And of course, self-styled “evolutionary psychologists” have long suggested that our current cultural preferences are inextricably linked to our biology, including the supposed male preference for longer-haired women, blonde women, and, more disturbingly, women who are as young as possible.

For a perspective that claims to be about our established evolutionary history, this has always struck me as a short-sighted claim. It ignores the diverse and ever-changing beauty ideals found throughout history and across cultures. It’s also strikingly Eurocentric, suggesting that there is something naturally more attractive about characteristics that white women are most likely to display. We are living in a Eurocentric society, and that has inevitably shaped the way we perceive and experience attractiveness, but I’m not prepared to accept that there is anything natural or inevitable about men’s attraction to long-haired women or blonde women, and certainly not to women—girls, rather—who aren’t even full adults yet. Those preferences are cultural, not biological, and they are certainly far from inevitable.

Invasion of the Body Snatchers

Of course, the fact that these preferences aren’t biological doesn’t really make a difference to me and my friends’ experiences—culturally ingrained ideas and preferences don’t have any less impact on our lives than biological ones. Seeing the “pretty lady” switch suddenly get flipped in men’s heads as my hair gets longer is fascinating, and a little uncanny. When several of them turn to look at me at the same time, part of me feels like they’re about to step into my bike’s path to point and squeal like Donald Sutherland in Invasion of the Body Snatchers. 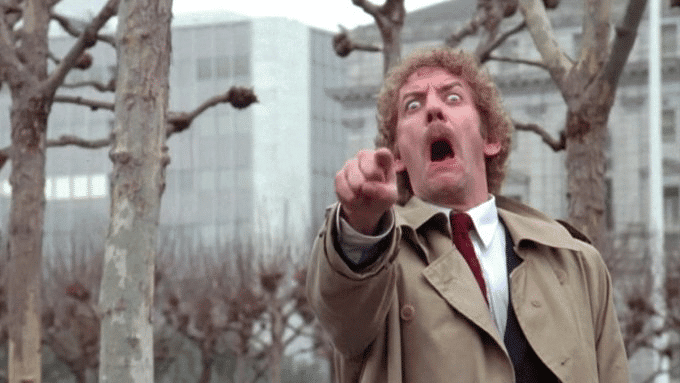 A common sight for women

Part of me wants to stop and conduct mini-interviews with these dudes to see what exactly they think they’re doing—are they even aware of how unsubtle they’re being? Are they aware that I too have eyes, and can see their reactions to me? Do they hope that their fixed, unblinking stares will have some sort of hypnotic effect on me, causing me to suddenly fling myself into their arms? Imagine the wedding toasts: “Raise your glass to the happy couple, everybody, brought together by the groom’s singular ability to go minutes at a time without moistening his eyeballs—may we all be so lucky someday!”

A less scary version of me

I didn’t fully realize the kind of protection short hair afforded me until that protection abruptly disappeared. So far as I can see, there’s very little difference in the way I look now vs. the way I looked when my hair was a couple of inches shorter, but there’s a world of difference in the response I get, and I don’t always know how to feel about it. Meeting my culture’s beauty standards as a relatively young, slim, able-bodied white woman has real advantages, including improved employability. And it’s not just men who seem to respond more positively to the longer-haired version of me—elderly people and kids have also seemed more comfortable with me lately, more likely to chat with me in line at a café or waiting for a bus.

The buzzcut version of me seems to be universally regarded as a little more threatening, sometimes to my advantage and sometimes not. It’s also pretty useful in queer contexts—I’m bi, which means that throughout my life, my queerness has been called into question. Actively choosing a style—hair, makeup, clothing, whatever—that marks me as other than traditionally feminine seems to alleviate some of the doubts that people often have about those of us whose sexuality isn’t easily categorized on one side of a strict binary division.

Back to the fashion mullet?

Part of me is tempted to go back to short hair immediately—there’s a freedom in the lack of daily male attention that comes with it, and I’ve never minded looking a little scary. I also loved my brief foray into the realm of fashion mullets. But so far none of this is enough to make me reconsider growing out my hair—it’s just gotten to the length where I can more or less pull it back, and I’m weirdly excited about that, and weirdly excited for it to be long enough that I can do a proper ponytail or even braids. The fun that I’m having with it outweighs the added pressure of the male gaze in my life, at least for now. But the next time I’m walking down the street and see a dude staring at me, slack-jawed, I may well give in to temptation and ask him if there’s something on my face.

Ministry of Bigotry: A Primer on Transphobic Logic & the JK Rowling Scandal

Why Most Straight Men Completely Avoid Their Prostates

Life After Transition: 3 Unexpected Differences Living as a Man