Sex and all the ways we’ve been able to innovate on it. Whether you’re gay, straight, a lesbian, or pan, love and sex is what makes us human, right?

Er… no. At least not for asexuals and other sexual orientations that are on the asexual spectrum!

Today we’re talking about asexuality and the myths that often pervade this important element of the LGBTQIA+ community!

Hold on, I thought the “A” was for ally!

Sorry to disappoint, but while it’s fantastic to see allies all over the globe helping queer folks take up the space we deserve, allyship doesn’t guarantee a spot in the community.

Don’t get me wrong, I am very grateful for the allies in my life who are loud in their support of the queer community. They’ve been helpful, especially when protecting queer and trans folks from having to explain basic conversations, but that doesn’t make them queer as well.

Having said all that, the “A” in LGBTQIA stands for “asexual” an/or “aromantic”! Hip hip for A(sexuals and aromantics)!

What’s an asexual and what’s with all the garlic bread talk?

So what is an asexual?

You’re probably familiar with the definition most people learned in biology about the definition of what asexual reproduction is. While that’s an incredibly cool process (nerd alert), this isn’t the type of asexuality we’re talking about.

An asexual is someone who experiences little to no sexual attraction towards others or general interest in sex. That’s it! Pretty simple, right?

Some allosexual (not-asexual) people might have difficulty with that concept, especially those who have a higher interest in sex.

“Zack,” I hear you say through the fictional phone conversation we’re having, “Sex is such a major part of my life! How can someone experience little interest in being physically intimate? Is it a health condition?”

Listen, I (metaphorically) hear you! You have some questions and concerns, so let’s begin addressing what asexuality is and is not.

What’s all this I hear about asexuality being a spectrum?

Like most things in the universe, asexuality is a spectrum! There are plenty of different types or ways of being an asexual.

Asexuality can be an umbrella term for various other types of asexuality. Some types include:

What’s the difference between asexual and aromantic? 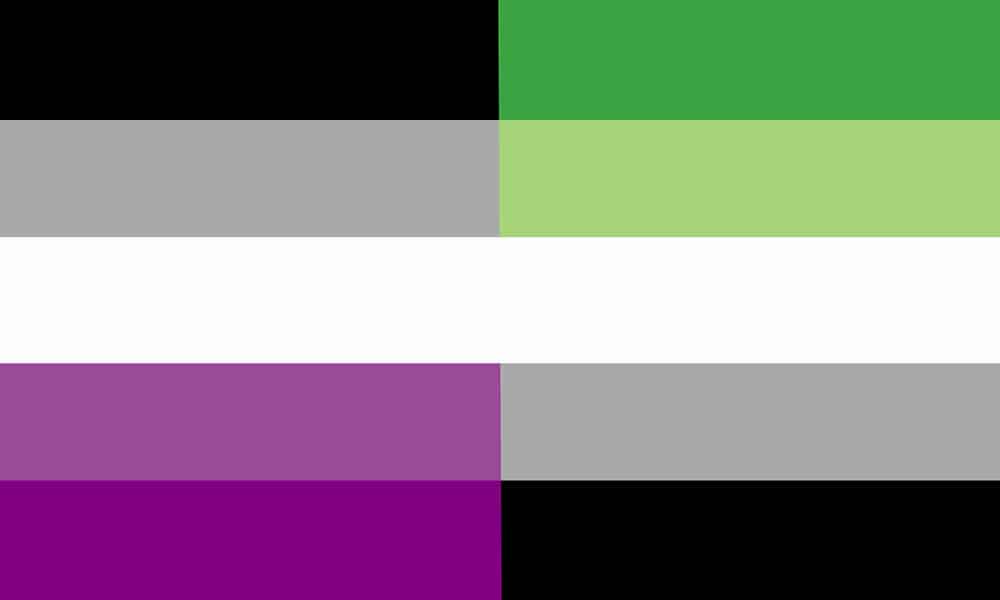 As in, someone who is ace might not be into a hookup, but still want to be romantically involved with someone and have strong romantic attraction. An aromantic person has limited to no romantic attraction to others but is considered an allosexual person. They have sexual attraction for others!

Myth #1: “Asexuality is a health condition!”

A big important distinction to make here is first between libido and sexual attraction. Libido is connected to your body’s internal “hunger” for sexual release, as Harlequin romance as that sounds. Many asexuals do have a libido, but still not be sexually attracted to anyone in particular.

Throughout life, some people might encounter moments where their interest in sex changes. Whether it be from stress, hormone fluctuations, depression, or just feeling rejected, allosexuals can experience a dip in their usual interest in sex. In these cases, it’s recommended that you check with your doctor. Sometimes something as simple as an iron deficiency can impact your sex drive.

For asexuals, though, they’re not medically “sick”. They likely didn’t have a sexual attraction in their formative years, so their baseline is more of a “meh” than “WAP”, you know?

Asexuality isn’t defined by the activity of having sex, but rather by the internal feelings someone has towards someone else.

Some asexuals don’t have sex and find it actually repulsive. Other asexuals don’t mind it, and some are positive about it. They don’t necessarily get the hype about finding someone else hot but they’re open to the actual activity of sex.

Someone might have also tried sex in the past, didn’t see what the hype was, and decided they didn’t want to do it anymore. And that’s completely OK!

Plenty of allosexual people play with kinks without having sex. People go to professional doms in order to be humiliated or spanked or flogged… all without penetration or sexual release.

Asexuals might enjoy being flogged because of the sensory experience of the leather hitting their skin, and the rush of endorphins seeing their partner be so dominating. Someone might enjoy how close and vulnerable they feel with a group of play partners.

There are plenty of reasons why people can enjoy kink, and sex doesn’t have to be one of them!

Myth #4: “Asexuals will be so alone without a sexual partner.”

Woah, lots of stuff to unpack here! Hold my hand, look both ways and let’s try to untangle the issue.

I’m repeating myself but, as we know, asexuals can have sex and still be asexual. (See above!) Furthermore, asexuals can and do date allosexuals. Maybe their partner doesn’t have much of a demanding libido and prefers solo sex to partnered sex. Maybe they’re all polyamorous and their girlfriend has other lovers! There’s even the possibility that the asexual partner doesn’t find sex repulsive, and chooses to have sex. Aces can and do sometimes have libidos. It’s fairly common, so sex might be a fun way for you to scratch that itch with a dance partner (wink wink).

There are so many reasons why people have sex while still being asexual!

Also, we can all be alone and feel lonely especially as we age. Our social groups are always changing, capitalism seems to become more and more engrossing, and our communities can be isolating. It doesn’t matter if you’re gay or straight or ace. Life can be really isolating, and people can fall into a false sense of security when they’re in a committed romantic and sexual relationship. Even someone who’s been married for decades can find themselves laying next to someone feeling more alone than ever.

Plenty of people might describe themselves as asexual and gay or lesbian or pansexual. If you want to be really sure what someone is telling you with these labels, ask them! Otherwise, it could mean that someone is asexual but romantically attracted to men/women/everyone.

While we have labels like “homoromantic” and “panromantic”, they’re not as commonly used. Someone might just find it easier to use “gay and asexual” instead!

They might also be on the asexual spectrum, but still experience some sexual attraction!

Myth #7: “Asexuals are just repressed and have trauma and dysfunction!”

Is this the same person from myth #1?

A lot of acephobia seems to be surrounding these particular words: trauma, repressed, dysfunction. That’s a really unpleasant combination of words, no?

For asexuals, it’s important that we trust them as sentient beings with their own understanding of themselves. Maybe an ace friend of yours told you about their sexual trauma. Your brain made a connection between that and their aceness! Before you say it out loud, keep that thought to yourself. Your friend has likely already considered the possibility and has decided they were ace regardless.

It would be a really shitty thing to ask a gay friend if they considered their trauma the cause of their gayness, no? Don’t do it to an ace person!

It’s true that at certain times of our lives, we can experience moments of severely depleted libido or attraction to others. Stress, trauma, and anxiety can really impact your state of mind toward sex. No one doubts that! However, we can also trust that people are able to use the correct words to describe their own unique inner experiences!